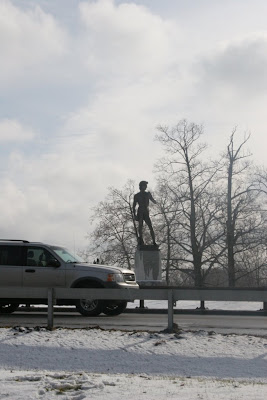 David and SUV checking each other out in Delaware Park.
Photo by BuffaloBloviator.
Yesterday I was in Balboa Park with Leonard Pennario. We had lunch there in a restaurant called Prado. We sat on the terrace and I was thinking, this is one of the most beautiful places I have ever been to in my life. Trees and flowers everywhere. And it was so quiet, with light classical music playing softly in the background. I was absolutely stunned by how beautiful it was. I kept looking around, speechless.

What a contrast to Delaware Park!

Normally I am fiercely proud of Buffalo. I am always thinking how beautiful our city is. But in Balboa Park, I found myself thinking: Why can't Buffalo be more like San Diego?

When it comes to parks, our city has blown it. You don't even have to contrast our parks with world-class parks like Balboa Park or San Francisco's Golden Gate Park. I have been to parks in St. Louis and Kansas City and thought the same thing. Our green space is nothing like the green space these other cities have. It does not come close.

Part of it is the Buffalo mentality. I think a lot of Buffalonians have a problem with quiet green space. They want to put something there. They want action. They want noise. So in Buffalo, beautiful flowers and landscaped paths take a back seat to screaming little kids playing soccer, big bellowing guys playing rugby, a truck route running through the center of Delaware Park.

Well, there are ways in which Buffalo is more peaceful than San Diego. We do not have the Angry Shopper. Here in San Diego, you can't browse Marshall's without feeling under assault by these weird women, striding briskly and aggressively in their heels ... What is your hurry? I want to ask. What are you trying to prove? Drivers here are more aggressive too. Changing lanes on the expressway is a fine art. It is an art I have thrown myself into mastering, seeing that I bought the rental car company's ripoff insurance and so have nothing to lose.

I have needed moments like the lunch in Balboa Park to de-stress from things like highway lane-changing. Also Leonard and I sat in the hot tub, did I mention that? I got to wear my new bathing suit from Target. I am going to say "bathing suit" instead of "swimsuit" from now on. I do not want the old-fashioned phrase "bathing suit" to fall from public usage.

This is a nice new bathing suit. It is not quite skimpy enough to be a bikini but certainly skimpy enough so that my mother would have a thing or two to say about it. It's funny how you never outgrow your mother lecturing you about the bathing suits you wear. (My mom, on another two-piecer I have: "I hope you didn't pay much for it. There's nothing to it.")

It's also funny that I realize that I have started collecting bathing suits the way other women collect shoes. I think I have about 30 of them now. Isn't that weird?

Maybe it's that California influence. Maybe I'm turning into a California girl.

Now it's time for my socially conscious cup of coffee.
Posted by Mary Kunz Goldman on May 16, 2008

I think Buffalo has enough similarities to California without having to copy their park systems. (I mean, we already embrace their wacky politics.) Despite the political similarities, I think the average Buffalonian’s idea of quiet contemplation is different from the average Joe on the left-coast.

In Buffalo we work with our hands, even on our off hours. When we walk around the park our minds are filled with ambitious engineering plans such as cleaning our basements and garages. San Diego doesn’t even have basements and worse yet, they actually use their garages for their cars. Here in Buffalo, we can’t fit our cars in our garage.

We have stuff and like to be surrounded by stuff – even when we walk in the park.

I think parks are to be used, which was, actually, Olmsted's notion as well. In a very real sense Buffalo's parks are our community back yard. This means that playing soccer, or rugby, or basketball, or baseball are all things we should be able to to enjoy. We should be able to run, and ride bikes, too, which is why allowing cars on the Delaware Park Ring Road is an abomination. You like flowers? Delaware Park has the Rose Garden, MLK has an arboretum, as does South Park....

If the worst you can say about Buffalo's parks is that they are not San Diego, well, hell, what is? San Diego is about as beautiful a place as exists in this country. And I'm sure it has parks were people play rugby.