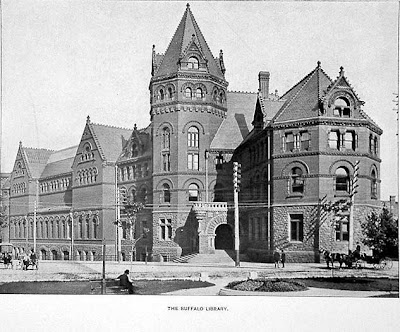 The old Buffalo Library.
My adventures in the Central Library continue. Every time I go there to research my biography of Leonard Pennario, men start following me around. Wait a few more paragraphs till you envy me.

Yesterday being a kind of pale rainy day, and my 17 or so books on Jascha Heifetz being two days overdue, I decided it was a library kind of day. I would have swung past my branch library, the North Park, but it is closed "temporarily." (Read: "indefinitely.")

Here is where our library closings hurt us. A while ago, during the fascist countywide purge of our library system, they closed my beloved Fairfield branch. That left me with the North Park, a little far for me to walk to but sometimes I do. Now the North Park is shuttered. Two words: carbon footprint. Mine just got a little bit bigger, and it's not my fault.

So there I am, in the downtown library, which isn't a pretty place to be, with patrons shouting and coughing and exposing themselves all over the place. I did not actually see anyone exposing himself but I have heard that happens there and I am sure it does. I am in the Humanities department, leafing through a history of Carnegie Hall, because Pennario played there so many times and I thought it might mention him. And this guy comes up to me.

"You're really looking hard for something," he said.

"So, you're interested in music?" he said. He pulled this book on Top Rock Hits off the top shelf. "Maybe you would like this."

"Well, I'm researching a classical pianist," I said. I should probably not have gotten into conversation but I smiled and was nice. That is how women are. It is often our best defense. And I kept kind of hoping the guy would walk away.

But he didn't. He did walk away for a second, but he came right back -- with an ancient, yellowed little book that turned out to be the screenplay to "The Sound of Music." I am not being sarcastic when I say that I love that our library hangs on to stuff like this. He opened it and held it out and I read, in italics, something about Maria and Captain von Trapp looking at each other under the gazebo. "Would this help?" he said.

"I don't think so," I said. I was starting to wonder what to do. The guy didn't look like a bum, and he didn't scare me. He didn't seem mentally or emotionally challenged, either. He was just dumb. And you could tell this conversation would have no end.

"But this is about music," he said, smiling tenderly at me.

Then I had an idea. "I'm going to go bother the librarians," I said, smiling. I heard him calling after me, but I just smiled and shrugged the way President Reagan used to do when he couldn't hear someone. And the story has a happy ending. Because I did go bother the librarians. And I got something done I hadn't planned on: I was able to hammer out a way to get these stories about Pennario from the Los Angeles Times that I have been missing. It will cost me 50 cents a story but still. I had to ask the librarians something so that's what I came up with.

A few weeks ago in the Central Library I was the object of another male patron's affection. That was when I was taking out those books on Jascha Heifetz. Heifetz is the legendary violinist Pennario played and recorded with, and won a Grammy with. I should have mentioned that up above. Anyway, I was standing there with my arms full of books on Heifetz and this 20-something hip-hopper came up to me. Cute hip-hopper, actually, big eyes under his hoodie.

That is a line I still love. I said "Yes," and smiled, but then he ducked around the corner and I never saw him again.

Oh, boy. I used the central library as a book-research source last year and each time was somehow more interesting than the last. There are so many interesting folks there.