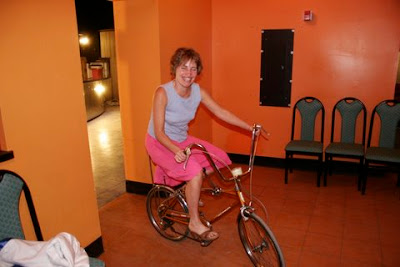 Author drying her hair.
What a racy slideshow we had yesterday! I will have to monitor the art on this site more closely. Howard is my art director and sometimes I lose track of what he is doing.

Also, my hair yesterday! In that picture!

Now I no longer have that "haircut." I put that in quotes to be sarcastic. I got that from Leonard Pennario in his diaries. He will put something in quotes when he is saying it stinks. As in: "Play the Rachmaninoff Second with the San Francisco Symphony, Arthur Fiedler 'conducting.' " AHAHAHAHAHAHA! I love that.

I have not had that long hair for a long time. When I went to California I had a pageboy cut, eerily like the one I had as a kid, which you can see in the post "My Sister The Left-Winger." But then I got a couple more haircuts in San Diego. The first was at a chi-chi salon in La Jolla where, being Buffalonian, I had a coupon. The girl who cut my hair was from Cleveland. No one in San Diego is from San Diego. The second was at, ahem, Supercuts in La Jolla. I ducked in there on the spur of the moment because Leonard and I were going to the opera the next day and I thought "Tannhauser" called for a new haircut. I know, Wagner would laugh, but that is how women think.

And Supercuts did a great job! They made my hair short, plus they fixed things so I don't have to straighten it any more. Later, back in Buffalo, the folks at the Ellicott Square Hair Salon built on what the Supercuts people did. That is how great artists operate. It is like Mozart building on Haydn. Now I don't even have to blow-dry my hair. I am in heaven.

Isn't it crazy how those among us with wavy/curly hair are always straightening it, while those with straight hair are always getting perms and whatever? Once I was in the waiting area of a hair salon and I looked around at the racially diverse group of women in the place. All the black women were straightening their hair while all the white women were curling ours. I remember thinking: If that isn't the dumbest thing!

My hair is somewhere between curly and wavy which has always been a problem. The weird thing is, hairdressers always praise it. "You have great hair," they'll say. If I have such great hair, how come I can't ever seem to get it right? And that reminds me: Dentists, through the years, have always told me, "You have great teeth." And look at me now, with my mouthful of metal! Goes to show. Do not listen to these flatterers.

Here is one more hair story. It's Friday, we have time. Once I wrote a story for Cosmopolitan magazine and a woman I told about it said, "Oh, I've always been interested in cutting hair."

She had "Cosmopolitan" mixed up with "Cosmetology"!

How do you begin to straighten this out??

At least I'm no longer asking that question about my hair.
Posted by Mary Kunz Goldman on May 02, 2008