Lastnight Howard, prince among husbands, picked me up at the airport, hefted my heavy suitcase into the trunk and then took me directly downtown to hear Jackie Jocko. It was great to see Jocko again because before I left he was down with the flu. Now I am back and so is he. We had him playing "Lemon Twist," "My Heart Stood Still," "Moon River"... I am trying to name more, but there are so many. Jocko is the human jukebox and he is great about playing requests.

Our friend Paul Kukoda showed up and that was the signal for everyone to join in an impassioned conversation about our usual topic, the great songs. I had a rumor I needed corroborated. The kid from Enterprise car rental who drove me to the San Diego airport had told me that a pianist who had accompanied Judy Garland and had written the song "Have Yourself a Merry Little Christmas" was alive and living in San Diego. I was wondering if that could be true. Paul and Jocko agreed that it could not be. 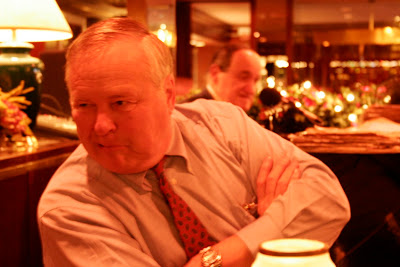 Musicologists Paul (foreground) and Jocko last night at E.B.Green's.
But you know what? I just got on Google and it turns out my guy from Enterprise could be right! The composer of "Have Yourself a Merry Little Christmas" is Hugh Martin. He was born in 1914 and he is, indeed, still among us. And he did accompany Judy Garland. He was a good friend of hers. The story I stumbled on did not say that he was living in San Diego but he must be. This must be the guy. How about that?

This is the sort of preoccupation that takes priority with me over weeding my garden and paying my phone bill. This is why my county taxes are overdue.

I may have mentioned, because I love mentioning this, that Leonard Pennario also accompanied Judy Garland, but only at parties here and there. She must have felt so lucky. Lastnight at Jocko we were talking about how Pennario shares our preoccupation with the great songs. He has a whole list of them he and a few friends put together years ago on a road trip from Buffalo to Michigan. It is a single-spaced typed list, about six pages long. I found it one day when I was going through his stuff. "Leonard, what's this?" I asked him. He said, "That is a list of the great songs."

Lastnight we had Jocko playing "A Pretty Girl Is Like A Melody" because Pennario loves that song and for some reason this week it came up repeatedly into our conversation. Pennario sang it for me a few days ago so I would know how it went. I love when he sings. One night last winter when we were sitting around, he sang Cole Porter's "All of You." I have it on tape. "The eyes, the arms and the mouth of you/The east, west, north and the south of you." Those are very cute and sexy lyrics. We had Jocko sing that song lastnight too.

It is great to take time out from your life and ground yourself by listening to the great songs. Which is why I didn't go home from the airport and instead, went directly to Jocko.

By the way, when I mentioned that to our friend Paul, he didn't even laugh.

oh i just love that christmas song. as a matter of fact, that's my favorite season mary!

I grew up in Buffalo and have been away on and off since 1979, now living in St. Louis. It's great to hear about Jackie Jocko and Leonard Pennario... Leonard and I both studied piano with Laura Kelsey (I'm now a professional musician in part because of the terrific start she gave me). I took my wife-to-be to hear Jackie playing with Joe Peters the night I met her... On future hearings at his supper club, he would sometimes call me up to play a tune or two (he deserved a break!) by introducing me as "Oscar Levant's illegitimate son"!! What great memories... We'll have to see him the next time we're in Buffalo.