Why Pennario matters to Buffalo 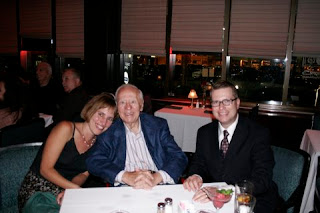 Heartfelt thanks to everyone who has been commenting and encouraging me in my novice blog! It's especially generous seeing that a lot of you are new to the world of piano and have just a sketchy idea of who Leonard Pennario is. Here we all are at the Hyatt, by the way: the author, LP, and Howard. We have all had a little bit of wine.

Writing about LP is important to me as a Buffalonian. I don't know if I have explained this yet -- I usually write my posts in a pre-coffee haze -- but Pennario is from Buffalo too. I think he is the greatest musician to come out of Buffalo. Here is a pianist who played Carnegie Hall with Jascha Heifetz, the greatest violinist of all time, and the legendary cellist Gregor Piatigorsky. They were historic concerts. They marked Heifetz' return to the New York concert stage after something like 10 years of silence. Heifetz could have had any pianist in the world -- his last pianist for the trio had been Artur Rubinstein -- and he chose Pennario.

Van Cliburn wanted to play with Heifetz but Heifetz never asked him. That is something to think about.

Plus, Pennario dated Elizabeth Taylor. Between husbands one and two, when there was something like a five-minute window of opportunity. That is something else to think about.

LP lived in Buffalo till he was 10 and his family had to move because his father's Niagara Street shoe store failed because of the Great Depression. He gave his first recitals here, and he still credits the nuns at Holy Angels School for making his mother buy him a piano.

What is really great about Pennario is that his records, his bios, his programs, everything always said he was from Buffalo. Not like Grover Washington, who always said he was from Philadelphia. Thanks a heap, Grover! When Pennario was on the jury for the Van Cliburn Competition -- he was one of only two permanent jurors -- his nationality was listed as "American -- born in Buffalo." (The other American jurors put simply, "American.") By the way, LP laughs that his mom hated the phrase "Buffalo-born." She said it sounded as if he came from the animal. Ha, ha! Now he has me laughing about it, too. 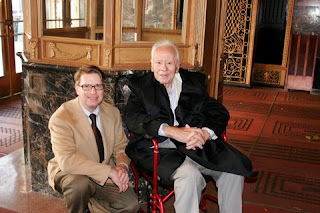 Last fall, Pennario (above, with Howard, in the lobby of Shea's Buffalo) was inducted into the Buffalo Music Hall of Fame. He has Parkinson's and he is in a wheelchair but still he managed to make the trip from California back home. It shows how much Buffalo means to him. I met him the night of the Hall of Fame ceremony. He let me sit next to him. We had to yell into each other's ears like college students because Bobby Militello's band was so loud but that just made it more fun. You can see pictures of me with LP on the Buffalo Music Hall of Fame's excellent Web site.

Buffalo Rising did a nice writeup about LP.

It's easy to talk about the book! Now I actually have to write it...
Posted by Mary Kunz Goldman on April 22, 2008

I'm a long personal friend of Len and Joe Pennario and
learned from a mutal friend of your work with Len's
biography. If I can be of any assistance, don't hesitate
to contact me at my email address: trihue@hawaii.rr.com.