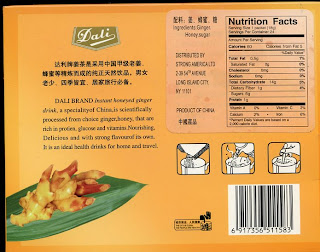 Leonard Pennario once toured Communist China, to great acclaim, and I have new insights into what he experienced there now that I have frittered away half my morning studying my box of Chinese tea.

I am normally a coffee person, but I love this stuff. I discovered it a few years ago when I was dining one night, before the opera, in Toronto. They had ginger tea on the menu and I tried it, and it was so good -- fizzy and delicious -- that I bugged the waitress after dinner into telling me where it could be had.

She looked around as if to make sure no one was listening and then she said, "You can get it in any Asian store. It's called a honey ginger drink. You can get it anywhere."

To which I now add: "It's really cheap." Especially if you get it where I do, on Bailey near LaSalle, at that International Market. It is my secret belief that you can find anything they have in Toronto on Bailey Avenue, if you just look hard enough. The tea comes in a big orange box and it's not even called tea. It's called Instant Honeyed Ginger Drink. It costs something like $2 for 24 packets.

The tea comes from Zhejiang and the packaging clearly dates from the not-so-distant past when no one in Red China spoke any English. It says: "Instant honeyed ginger drink, a specialityof China, is scientifically processed from choice ginger,honey, that are rich in protien, glucose and vitamins.Nourishing, Delicious and with strong flavourof its own. It is an ideal health drinks for home and travel." I have tried to keep their spelling, punctuation and spacing intact.

And the best... the best... is in very small print, so small that I never noticed it before this morning's intense scrutiny. It shows a pair of hands, and what looks like a garbage can. There are eight tiny Chinese characters, and beneath them, it says:

THE CITY IS CLEAN
THE PEOPLE ARE HEALTHY

I will have to go to Zhejiang sometime and see if this is so.
Posted by Mary Kunz Goldman on April 20, 2008