The food of love 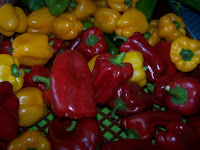 I got up this morning and the birds were singing. The strange thing is, it was only 3:45 am.! Who knew birds were singing that early? I must have known that back in the days when I was hanging out at the Central Park Grill until dawn, but now it took me by surprise.

Sometimes I can't sleep because I have too much on my mind. When that happens, I just figure I should go with it, get up, there aren't enough hours in the day anyhow. One of the things on my mind lastnight was, you guessed it, food. We were going out to a concert lastnight and I was making dinner beforehand and I realized I had hardly any vegetables in the house (unless you count me, parked all day at my desk ... AHAHAHAHAHAHA) Very unusual for me, because I'm always flirting with the South Beach Diet and it is not unusual for us to have seven different vegetables in one dinner. I will have to go food shopping.

Here are six places I like to go food shopping.

1.) The Broadway Market, except during Easter season when it's too crowded. Before I and everyone I know got cell phones, we would sometimes leave messages for each other with the butchers. As they were wrapping up your soup chicken they would tell me, "Your brother was here and he said he'd meet you at St. Louis for 4:00 Mass." You don't get that at supermarkets. You don't get soup chickens, either.

2.) The Clinton/Bailey Market. Gritty and urban and so much fun. Daniel Leader, the baker who owns the chic Catskills bakery Bread Alone, said in a book of his that he was inspired to get into the food business by going with his grandfather to the giant food distribution warehouses across the street. "The energy was intense," he wrote. His grandfather was in the burlap bag business, which he explained is how food was packed before plastic came along.

3.) Guercio's. I love Grant Street even though it can be pretty run-down. (Those words look funny together, but I am still half asleep.) Produce is cheap at Guercio's. And the ambience is such that people sometimes yell at you. I got yelled at once for taking my purchases out of my basket for them to ring up. They like to do that themselves. Roman Mekinulov, the Buffalo Philharmonic's principal cellist, once was looking for some fresh herb or other at Guercio's, and a staffer told an attendant to get it. And the attendant yelled: "I'm supposed to be going on break! God damn it!"

4.) Lorigo's Meating Place down the street from Guercio's. My brother George, the one who looks like Mozart, buys pies and cakes here for something like 50 cents. Spices are incredibly cheap and you can buy a pound of yeast for $2.15, I think it is. I used to bake bread before this concert pianist ate my life. Now all I do is work on this book. But when it's all wrapped up I will go back to that jar of $2 yeast in the fridge. It'll be there!

5.) Trader Joe's. When I go back to California to see Leonard (Pennario, the pianist I am writing the book about) I am looking forward to going back to this marvelous chain. Great cheap hippie food, plus in California they let you buy wine in supermarkets and Trader Joe's has great inexpensive reds from Argentina and Chile. Would that we could buy wines in supermarkets here.
6.) My garden. I have a very sloppy slapdash garden and believe it or not, there is already something to harvest --this mystery plant called sorrel. I put it in last year and totally forgot about it -- but there it is, this green leafy thing that seems to be some kind of a cross between an herb and a vegetable. Luckily I put this tag in the ground that said "Sorrel" or else I would have thought it was a weed, like most of the plants in my garden. The next challenge is to figure out how to use it.

Now I have to eat something. There was a French chef, Pierre Franey I think it was ... his daughter wrote in the preface to one of his cookbooks, "He always awoke thinking of what he was going to be cooking and eating that day." Sounds like me!
Posted by Mary Kunz Goldman on April 13, 2008

understand this is the 6th most read blog in april....keep up the good work!!