The Winner of the Buffalo Marathon 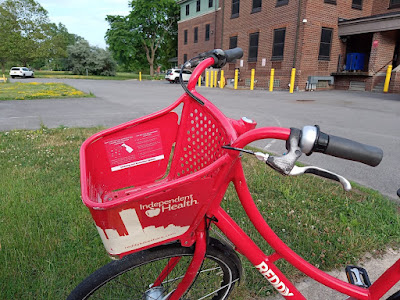 We held the Buffalo Marathon today here in beautiful Buffalo, N.Y. The results are in.

The winner is me!!

I do not think anyone in the world, let alone in this city, topped what I did today which was bike 30 miles.

Not only that but I biked it on a Reddy Bike. You burn a million calories just hauling the heavy thing up and down curbs.

I did not intentionally win this race and set this record. The fact that the marathon was going on necessitated that I bike downtown to Mass in the morning. All the streets are closed off every year for this race. You just cannot get anywhere. Last year, I remembered, I made the mistake of driving and only a miracle got me there just in time for the opening hymn. If I was going to spend hours in transit, I may at least enjoy myself while I'm at it. And I do enjoy riding a bike!

The 7:30 a.m. bike trip, on one of those city Reddy bikes, went well. The rental bike's gears did not work -- there is always something. The only gear was the one you use on hills, a gear I have never used. However the good news is, I got used to it, and it was kind of pleasant, because when I was riding uphill, I really didn't notice. Also, I have to admit, it was nice having no traffic on the roads. They enforce this race. I kept seeing motorists being pulled aside and interrogated. Not me! I just sailed through on my bike.

I enjoyed that ride so much that later I ended up attempting to bike to the Outer Harbor to meet my friend Brenda. What could possibly go wrong? La la la la la la la.

Long story short, after an idyllic ride down Niagara Street and a glorious segue along the riverfront, a lot went wrong. Hence the 30-mile daily total.

Thirty miles! It was like biking to Niagara Falls and back.