I wonder how many artists all over the world are resolving to draw at least one thing a day in the new year of 2021.

That has to be a resolution going back to cave man days! I mean when people would draw those cows and things you would see on the walls of caves.

Well, I really do plan on doing this. And so on the way home from Mass this morning I stopped on Elmwood Avenue and sketched what you see up above. It is the former parochial residence for the old Immaculate Conception Church in Buffalo's Allentown district.

When I was in my early 20s and just starting out in the job market I worked at Interval International, a time share exchange place. I used to go to Mass at Immaculate Conception because, I discovered, it was not far from my workplace.

Of course the church ended up closing, like so many of our other churches. But at least it is still standing, and so is the old rectory I drew, built in 1895. I looked up the year. That is part of the fun of doing all this drawing, I look up everything I draw, and I learn.

Here is a picture of my sketch in progress. It looks like a big doodle! 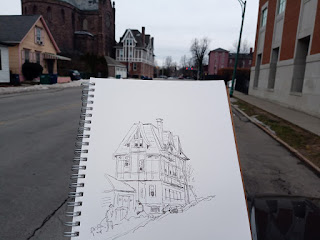 I worked on my drawing for a little longer but I had to stop eventually because I was in what my parents used to call Food Emergency. I needed lunch so bad my hands were shaking. The Mass had gone on for almost two hours, way longer than I had expected. When they start Benediction you know you are there for the long haul. Anyway, I took the picture home and dressed it up and put it up on my gallery website. Then I got out this notebook I have and made a note that I drew it, and put the date.

I realized it was exactly a year ago today that I sketched Holy Angels Church, on Buffalo's West Side. That church has closed now too. Sigh.

But on a brighter note, forward we go!