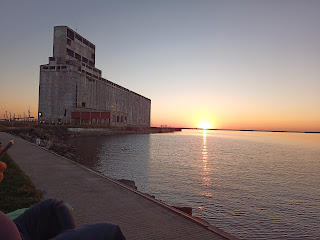 Today was Placido Domingo, that is to say, Serene Sunday.

My mother used to make that joke, how Placido Domingo translated literally to Serene Sunday, Placid Sunday. I think she got it from my aunt. But today my friend Zach came up with it independently and it made me laugh because it made me think of my mother.

A small group of us were on the beach and enjoying our Placido Domingo. That is a picture I took up above of the grain elevator near Gallagher Pier. After I took the picture I was thinking, it looks like one of those weird pictures that Google throws up at you for your wallpaper or whatever. Some weird picture from some corner of the globe that you cannot guess. Usually it is in Thailand or Qatar or somewhere but in this case it is Buffalo, N.Y.

I have sketched that grain elevator many times as have many artists around here because it is just so world class. Here it was last week when it was so cold and windy I could not get out of the car. 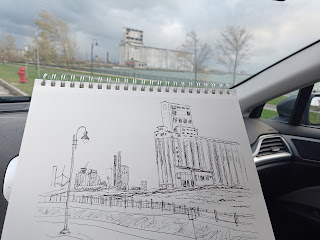 Today was so warm and wonderful, it was like July. Except it was November and it got dark around 5 p.m. Still it was magical. 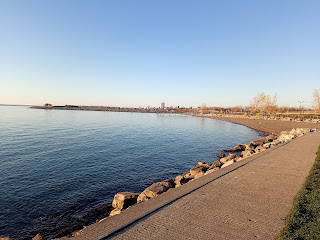 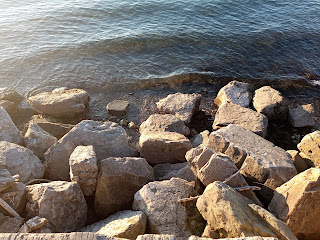 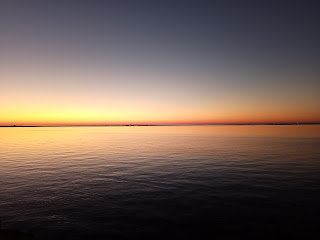 Today it was beautiful. It was warm -- hot, even -- in the sun, even though here we are well into November.
We watched the sunset and spoke of this and that. Other people had gathered too and were sitting on the Adirondack chairs, opening beverages and watching the sunset. Speaking of beverages a couple of women spoke up and addressed the gathering, asking if anyone had a bottle opener on his or her key chain. I did! And they were able to open their Angry Orchard cider.

We will remember it!