From summer to fall 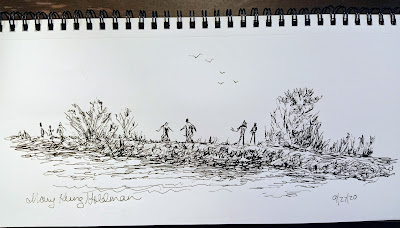 Yikes, all at once it is Autumn~!

That ~ symbol ended up there by mistake but I like how it looks so I will leave it there.

Just a few days ago it was warm, sweltering even, and I drew that little sketch up above. Actually the sketch is about a foot long. I drew it in my Long and Narrow sketchbook which I choose to use when I want to have fun.

I did that sketch at Wilkeson Pointe on Buffalo's Outer Harbor. I was there with my friend Ryan and we had noticed how cool these people looked walking on this ridge. They were silhouetted against the sunset and looked like shadows. The woman second from the front was wearing a sari and I did try to get that sari in there. It is fun working in ink because there are no second chances but also you do not erase and fuss over things too much.

Anyway there it is, my portrait of people walking along the ridge at Wilkeson Pointe!

I like any drawing I did that I can look at and say: That is pretty much what I saw. This drawing does that.

Soon I will be going back to drawing at least some of the time in my car. How things change! The other night I made it to the Outer Harbor but it was, I must admit it, pretty chilly.

Today I wore a scarf when I went walking in the park. I took this picture. 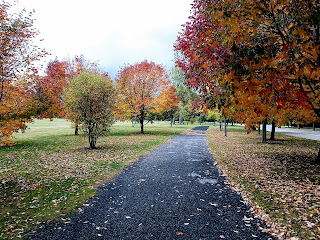 I met my brother George and he had a knit cap. It was one of those days in Buffalo when you saw people in shorts and people in parkas.

I am working on getting Christmas cards printed! There, I said it ... Christmas.

It is closer than you think!