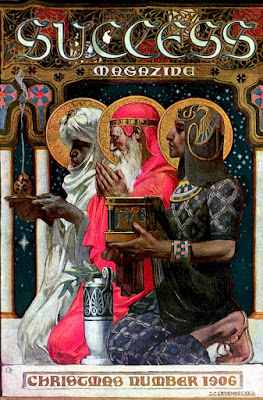 Today was Epiphany, affectionately known as Little Christmas, and I went this evening and heard Mass.

I not only heard it, I sang it!

Not that it was easy. There was this 10th century Credo we sing that, the whole time I am singing it, all I can think of is skiing down a tricky hill, not that I have ever skied down a tricky hill but if I did this is what it would be like.

There is always something that makes you pray, "O God, let me not blow it."

And there is likely a time when you do blow it. That is a whole other story.

This Mass I have to admit was an uphill climb starting when on the way up to the choir loft, I ran into our youngest singer who is 12. And she told me, "Your veil is upside down."

Only I could wear a veil upside down!

But it is all worth it in the end. We ended Epiphany Mass with -- what else? -- "We Three Kings."

Someone else really should write an Epiphany carol because this one really has the stage to itself. However it was beautiful as we sang it. I sang alto, a part I learned on the fly at Sunday Mass yesterday. It was me and the 12-year-old and six kids in their 20s.

One gift I have is the most important vocal gift of all, and that is the gift of watching the director. I did that and was able to make up for that I had missed whatever rehearsal it was where they had covered this hymn. It was honestly giving me shivers. It was that beautiful. The guys came in one by one and sang solo the verses the Kings sing ... "Myrrh bring I, its bitter perfume..." And we all hummed our parts.

It made me think of Christmas Eve. At Midnight Mass we sang "Silent Night" as the procession was beginning the Mass. I happened to turn and look over my shoulder from the choir loft and the scene was so transfixing, I could not look away. The altar boys, the cross, the incense.

Today we also reprised "Lo, How a Rose E'er Blooming," in Latin of course. The alto part is magical in that.

This Christmas has been unique in my life. One reason I will remember it is for the singing. How enchanting it was. The last-minute rehearsal on Dec. 23. The "O Magnum Mysterium" at 1 a.m at Midnight Mass. This beautiful Three Kings mass. The medieval chants that are like skiing down a tricky hill.


We were given holy water and blessed chalk and for the first time in my life, when I got home I did as I was directed and I sprinkled the rooms in the house with holy water, said prayers, and took the chalk and wrote over the door, "2020 + C + M + B + 2020." The letters stand for Caspar, Melchior and Balthazar. That is their portrait up above on the cover of Success Magazine -- where they belong, being kings. If the Three Kings do not deserve to be on the cover of Success, who does?