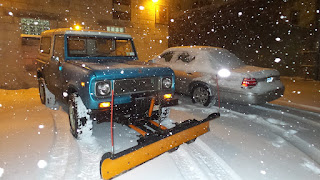 Today is the first snow and we are supposed to get several inches before tomorrow morning. Luckily it is ending about 6 a.m. and then we can plow out.

I always have great sympathy with people who have to get out and go somewhere because so often that has been me! I come from a family of teachers and when a snowstorm blows in, they are all la la la la la la la, because if it gets bad, odds are they will have off, and they can sit around and make snowmen and bake cookies.

Not me! I always had to get to work and even now I have to do work related things a lot. And I have to get to church for various things too. There is always something. Reminds me, I am fascinated by that song, "Let it Snow, Let It Snow, Let It Snow." I did a Let it Snow Christmas card, with a sketch I did of Hertel Avenue digging out after a storm. 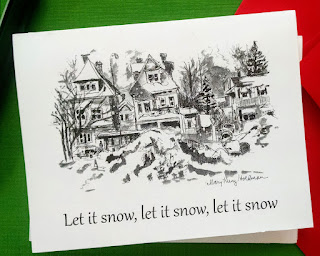 But the lyrics, they have little in common with my life. Granted I think too much. But a few days ago I heard ...

And I was thinking: I cannot imagine a set of circumstances where I could just say, let it snow, let it snow. There is always something! If not tonight then next morning. Or next afternoon. You would have to be on vacation or something.

I am very lucky in that Howard is out getting the plow in order. He took that picture at the top of the plow, deployed just today, and my old Crown Vic next to it. Howard drives the Vic now.

I am sentimental about the Vic because Leonard Pennario rode in it and so did my mom. But the Vic is terrible in snow and looking at it I remembered terrible times in it. Such as once when I was coming home from The Buffalo News in a snowstorm. I was driving the Vic over the bridge on Michigan Street right by Scott Street and I was stuck in traffic and all I could think was, I am going to slide all the way down this bridge hitting all these cars.

So what I did was, I called Howard from the top of the bridge. As if that was going to do any good! But somehow I think it did. He calmed me down and then miraculously the Vic did not slide. Things went OK and I made it home ... hours later, but I got there. That was not a long time ago. That was pretty recent. It was funny, I was thinking: This is the worst snow drive of my life. And that included the time I was driving home from the Niagara Gazette and did a donut on the Robert Moses.

The memories that a first snow brings!