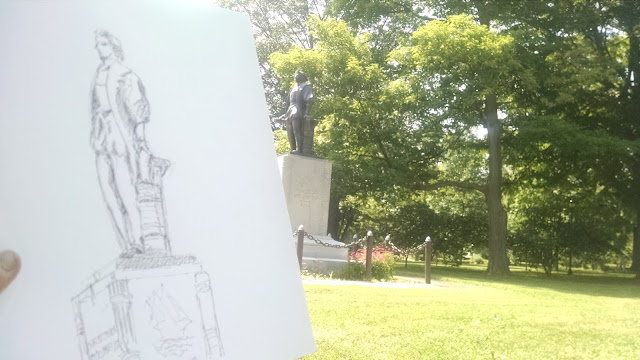 Yesterday my friend Meghan and I went to Columbus Park and drew the statue there. I sent Howard the photo up above and Howard posted it on Facebook with the title, "On this day, Mary discovered Columbus."

Which I love! But it goes deeper than that.

You never know when that statue of Columbus will be gone!

Every year Columbus is back in the limelight on Columbus Day. He has been dodging bullets for years. Somebody does something, douses the statue in red paint, vandalizes it somehow. He stays standing there stoically, handsome in his Renaissance pantaloons, holding the territory. Every year, after Columbus Day, there is a kind of thanksgiving. Columbus lives to see another year.

Whether that will happen again is uncertain. I understand a sign is nearby saying Columbus is to be removed. I did not see that sign.

Who is going to get the statue?

Can I have it?

Just a few weeks ago we all saw the reproduction of the Santa Maria in the harbor and we all loved it, as you can see in my picture. 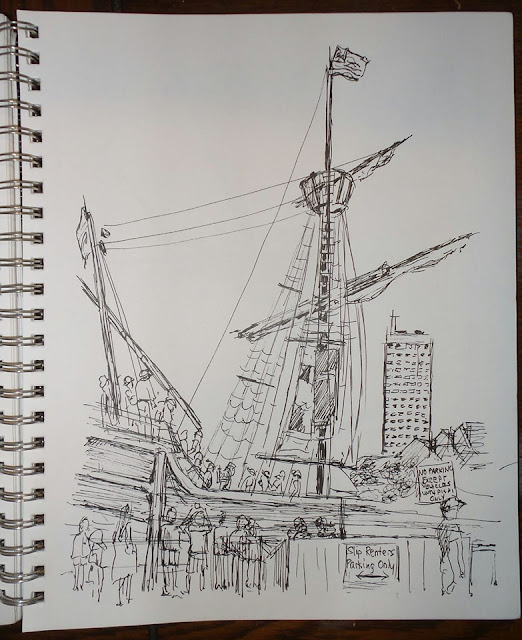 About the statue of Columbus, can we all just get our heads together here?

People demanding this statue come down should take a step back and admit something -- that they do not know the first thing about it. Nobody does.

Until we have a chance to do that, can we just leave the statue up? Just an idea.

It is a beautiful statue. The foundation reads that it was dedicated by the Federation of Italian-American Societies and by the Public-Spirited Citizens of the City of Buffalo. That is a description I love.

Columbus Park was beautiful when we were there. A woman was sitting on a bench reading a book. Hours passed and she was still there and so were we. It was quiet.

Except -- I almost forgot this -- this big brown-and-white bird kept swooping around, making this big loud call I never remember hearing. It was magical, this day, this place.

I want this place to stay, as it is. With the statue.

I want Columbus to stay so I can sketch him again!