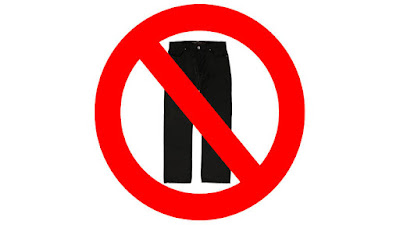 I have received inquiries as to whether I am still adhering to the Skirts Only rule.

The answer is yes!

How long has it been now? Maybe a month? For the most part I have been having fun with it. I cannot resist a game. That was a problem back in Lent because I was treating this fast I was on as a game, and I kept trying to look for ways to make it easier while still sticking to the rules. Finally I had to tell myself, Uh, Mary? The point of this fast is not to outsmart it!

But that was the only way I could stick with it!

Anyway, this skirt thing. I am going the extra mile and wearing only floor-length skirts because that was what was suggested and without that it would be too easy because I was never really a pants person to begin with.

There is also the matter of the sleeves. Again, it is not as if we are bound by this at church or anything, but the suggestion was for sleeves to be elbow length.

For the first two weeks or so I just used what was in my closet. I combined things different ways. And it was fun because I wore things I had never worn. Two dresses in particular that I had never worn before became staples of my wardrobe. One is a pink Izod cotton maxi and the other is a loose ivory-colored rayon sleeveless gown by All That Jazz.

The problem with both of those dresses had been, they were too skimpy to wear out for most occasions, probably for any occasions, now that I think about it. Yet it had never occurred to me to wear anything over them. Until now! Now, I needed all hands on deck, and these dresses, not being polyester, were called into play.

Now, they are out and about! So are these cotton halter dresses I have. I have always loved these dresses and now they have a new look worn under an array of lacy tops and cotton shirts and jackets.

After about two weeks though I could see I needed some stuff, mostly in the sleeves department because that is a bigger challenge than the skirt. If anything would make me give this up it would be the sleeves rule, because in the heat it is no joke, and also I love going sleeveless. It just feels so good.

But I went shopping and that helped. Shopping always helps. I went to Amvets and Goodwill and acquired a range of loose cotton tops for this heat wave we are in. Oh! And I went to Salvation Army and I struck gold with some gorgeous colorful light vintage cotton shirts from Buffalo's own Chain's India Boutique. I wear them a lot with the Izod and the All That Jazz dresses. Score!

Today at Amvets I found a cotton flowered jacket from Spain. It is like wearing a cloud.

I will have to photograph and post pictures of these items. Meanwhile... good news!

Since I have done this, not only have I suffered no sunburn, I have received a ton of compliments!

Strangers have asked me where I shop!

I went and drew the Tall Ships on the Buffalo waterfront ,,, this is one ... 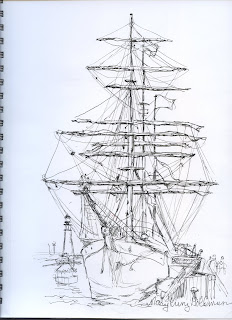 ... and I was in one of those long white flowered halter dresses and one of my cotton white smocks and a straw hat -- and people thought I was part of the show! I guess I looked vaguely 19th century.

A passer-by took this snapshot of me. 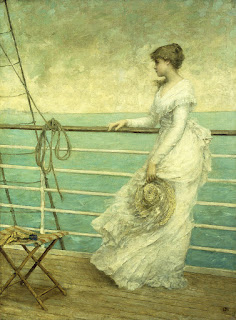 And as I stood there sketching, folks treated me like this celebrity. The crew of the Nova Scotia ship invited me on board. I was in this daze. I had never foreseen any of that happening. I had simply been hoping to get in some good drawings.

Would any of this had happened were I wearing shorts, as I think I would have a few weeks ago? Or even a shorter skirt? I am not sure.

But one thing I am pretty sure of.

I am going to stick with this!