Mr. Blue Bird on my shoulder 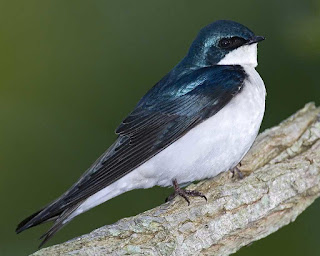 Today in between baking for church and working on other things that needed working on, I managed to get in a walk around Hoyt Lake.

It is always a great victory to get in a walk on a cold and dreary day! You feel like Beethoven, triumphing over the elements. And as I walked in the park the sky brightened and the sun peeked out here and there.

Not only that but there were these blue birds that fascinated me.

They were zipping around over the water and around me, twisting and turning, so fast it was hard to get a good look at them. I did see that they were a kind of iridescent blue.

I made this valiant attempt to take their picture. 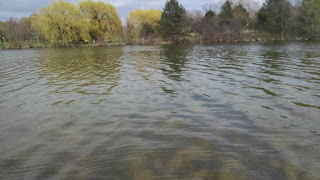 Ha, ha! This is one instance when a sketchbook would serve better. Let us admit it, there are many such instances.

When I got home I looked them up and I do believe they are tree swallows.

Above is a tree swallow from the august Audubon Society. I would not have recognized it because it never saw one sitting still as that one is.

How did they get that bird to sit still? 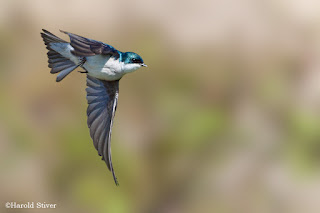 But still, I never got that clear of a look. I was just trying to get in my head what I could. Blue back, white underbelly -- yep, that's him.

These birds felt magical. They were swooping and dipping everywhere, just zipping around. Nobody else seemed to notice. Everyone else was looking at screens and listening to headphones.

They just could not swallow the Tree Swallow!