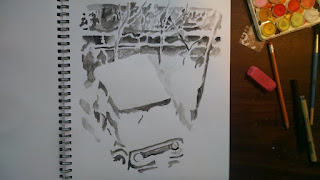 We are in the throes of a snowstorm here in Buffalo. And this morning I drew the above picture of Howard's 1970 International Harvester Scout, parked in the back yard and ready for action.

The whole city is pretty much shut down. The federal workers are furloughed again. The state jumped on board and those workers are off too. Schools are all shuttered, no surprise there. There are driving bans.

My friend Meghan, God love her, texted me this morning to go sketching the way we do every week.

I liked the idea and I said yes!

Then we went back and forth about what coffee shop we were going to go to. We found that Spot Coffee downtown was open until 3 p.m. so we decided to go there. Coffee shops are great to draw in when it is too cold outside.

"This is why we are going to kick every other artist's butt," I texted Meghan. Well, maybe I was not that rude but I was rude enough.

.. Howard threw water on my plans.

That is too chilly to say. Bad metaphor. He put the kabosh on my plans, shall we say.  He had been out with the Scout and it was just too cold, he said.

"My fingers froze in 10 minutes even with heavy gloves," he reported.

So I had to slink back to Meghan with an apology and a reversal of plans. It is not as if Howard would have prevented me from going. Do not think I had not thought all this out! But it was like inviting something to go awry because if something did, Howard would not be quick to bail me out. Well, he would bail me out, sure. But I would not soon hear the end of it.

It must be, because here it is dark again. I am never bored, I will tell you that. I am never stir crazy, not really. I have been sitting around drawing and writing and enjoying my endless stock of Celestial Seasonings Christmas tea.

Speaking of which, did I mention that my Christmas tree is still up? No wonder I am enjoying the day.