A Midnight Mass to remember 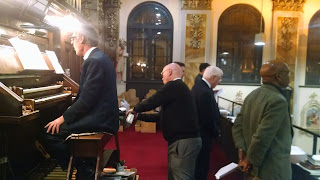 Today being the Octave of Christmas it was back to Mass again. Everyone is laughing about how nobody knows what day it is any more.

All we know is we are in church all the time!

But nobody minds. The music was beautiful. We got to sing "Resonet in Laudibus" and "Silent Night." Everything was very calm next to a week ago, I will tell you that.

I do not believe I have written much about our Midnight Mass. It was an adventure!

This was the first Latin Midnight Mass that Buffalo had seen in decades. So we were nervous. I was not even planning to go to it to tell you the truth. I did not grow up going to Midnight Mass. We could go when we got older and could go on our own. My parents absolutely were not up to it. Long story short, I am more a Mass of the Shepherds kind of girl. Give me a crisp Christmas morning any day.

But around 9 p.m. on Christmas Eve I decided I had to go. I did not want to miss this Mass. And for once we were not hit with a Christmas Eve snowstorm. And so after dinner with Howard I drove downtown to St. Anthony of Padua.

Good thing, too. Because it turned out the choir was overwhelmingly men and desperately needed some women's voices. And as it was it was just me and my sketching buddy Meghan and three teenagers.

My brother Tony played the organ. That is he in the picture at the top of this post, bathed in light as if he is transfigured. I snapped that picture at Midnight Mass. I took it at the end when I could finally relax.

Tony is a wonderful organist but we had not practiced or anything and his playing is complex and not easy for me to follow. In the Kyrie I was waiting to hear when I was supposed to come in. And my cue never came! Then I realized what was happening. Tony was playing something like what I was supposed to be singing, except he was way up in the high treble, making a kind of chirping, fluttering sound.

Son of a sea cook, I started to laugh! I could not sing for a moment there and everyone else on the girls' side stopped singing too in solidarity with me.

I had to get a grip and tried to make myself think of sad stuff.

"Mary," I told myself, "it's Christmas. Your mother is dead. Your father is dead. Think how much you miss them."

But I could not sober up. On top of being nervous I was punchy. I am not used to being up all night and our Midnight Mass, I should point out, actually started at midnight and not at 10 p.m. or 11 p.m. the way some churches time it.

Finally I imagined myself walking through a snowstorm, compass set on North, just walking. I just sang what I was supposed to be singing and I got through it that way.

Weak beginning, strong finish, as we sometimes say up there in the choir loft. The important thing is, we pulled off our Midnight Mass. It hit its stride at the Gloria and after that things went OK.

Next year should be pretty darned good! But for today it was just time to relax.

The Octave of Christmas.