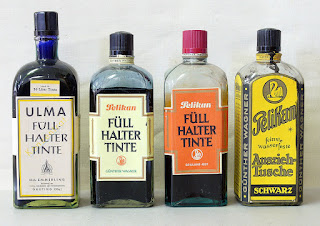 I want to do Inktober this year. It is a 30-day art challenge and all you have to do is draw in ink.

That could even be a ballpoint pen!

Of course I do like to complicate things. That is why my Leonard Pennario book project has taken me 10 years and also why I am drawn toward those fine inks from Germany pictured above. Drawn to the inks, get it? Ahem.

Also I had to go complicate things by getting a sheaf of colored inks and I would like to try painting with them. At the same time, though, I like that ink can be simple. Plus I love how ink goes with October. Way back in '08 I celebrated October by telling tales of the supernatural ever day.

It is high time I did that again!

Along with Inktober. I can post my pictures too.

Anyway today, downtown, we sold out our donuts in only half an hour or so, and I had extra time, so I biked by Forest Lawn and began prepping for Inktober. I drew mausoleums and statues.

Ink might be simple but it is a challenge in that I did not let myself use pencil. I have to learn to wing it. I used a narrow little drawing pen.

I drew these things. 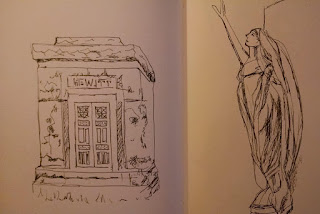 That was a stone mausoleum and on the right is this statue which I believe is called Aspiration. Forest Lawn is kind of strange like that, you find statues to things like Aspiration.

Aspiration was a doozy to draw. It got discouraging because when I get to work in pencil and erase, I am capable of better stuff. Several times drawing in ink I almost gave up. But I made myself keep going.

I did not want to take forever on any one thing because I have all kinds of work to do. So after a little while I turned the page and began again. 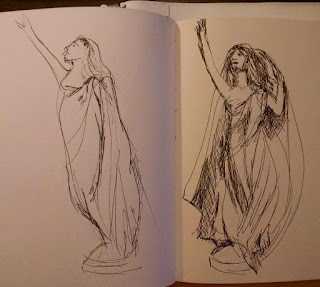 Technically these are not much better. The picture on the right, I almost ripped the page out in disgust. But I kept going.

I got home and first thing I did was get out my sketchbook and look things over. Funny thing, at the cemetery I had felt like a loser because I was thinking everything I had done was kind of a failure. Then I saw that picture and thought, I have something going on with this one.

This picture, I kind of liked it. I liked its swirls and its long lines and the weird look on Aspiration's face.

Clearly Aspiration was thinking, What in the world?

This picture was one percent Aspiration and 99 percent perspiration.

This will be fun!