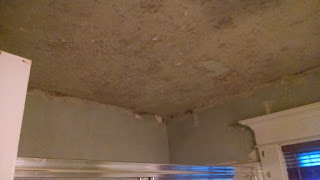 I got tired of the popcorn ceiling in my bathroom so I took it out.

I have read that no one should ever put a popcorn ceiling in the bathroom on account of it is wet in there and the wet brings the ceiling down. That seems to have been the situation in my house. That ceiling was coming down whether I wanted it to or not! There were a number of patches of no ceiling.

My sister Katie checked it out and said I could likely remove it with a putty knife. So I decided to do that.

Cost of the project: $2. One buck for a putty knife and another for a 10-pack of face masks, both from Dollar Tree. You can also get eye-protecting goggles at Dollar Tree for a buck but I had a pair already from making soap. Did you not know I made soap? There is a lot about me you do not know!

Honest, though, I never thought I could take down this ceiling. The secret is just to do it. Do not think too much about what is involved or you will just want to go lie down.

It was about 90 degrees. I was scraping away! They are right about you need the goggles and the mask. But it was tough going from time to time and I did not think I would finish.

I put a sheet over the sink to catch the ceiling bits. 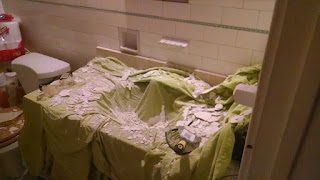 There were parts I could not reach and so the action shifted to the tub area. I put the sheet over the tub. 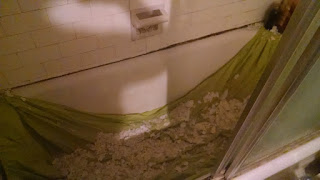 Then things were going well enough so I decided not to give up on the part of the ceiling I had left. So the sheet moved back to the sink. In time it moved back to the tub. I could not complete each section in turn. That is just not how I roll. Several times I even gave up and did a complete clean-up, only to begin again.

It was thrilling when I realized I was winning!

It got so it was raining ceiling. Huge slabs of popcorn ceiling were coming down. At one point a slab hit the light switch and turned off the light. A lot of it also came down on my hair. When I was through I took this picture in celebration .... 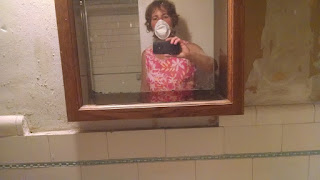 ... and then I had to take a shower in my cleaned-up tub.

Hence you may take this post's headline literally. I'm gonna wash this ceiling right out of my hair! That is what I sang in the shower.

Next comes the task of painting the bathroom. I think I will do the kind of sage green it was so many years ago. The ceiling was the same color and I will do that too.

At the top of the post is a picture of the ceiling as it is now, sans popcorn. It is cracked but kind of pretty, you know? Like something you would see in an ancient building in Venice, along with a plaque saying that Wagner wrote "Tristan and Isolde" here, or Leonard Pennario stayed here.

Well, OK, you have to use your imagination. I do!

But as I said, I never imagined I could do this. And now as a woman I feel very proud.

I have shattered the popcorn ceiling!