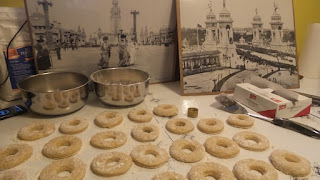 Howard is making donuts. That is a picture of them up above, in progress.

We sold donuts the other day at our downtown booth. The spotlighted donut is, as seen in the picture, the "1901." It is a tribute to the Pan-American Exposition, held in Buffalo in 1901, where donuts such as ours, such as Howard's I mean, would have been in the offing.

The donuts are hearty. They could be a meal. I cannot allow them in the house, is all I can say. They are crunchy on the outside and dense and delicious on the inside. 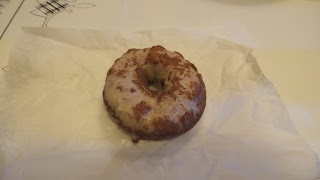 Here I am selling them at the booth. This is a celebrity shot with the poet Joe Dinki. 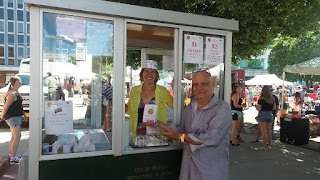 Because parking was impossible Howard and I took the train. He took this picture of me. 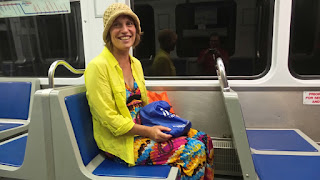 I am having fun living the bohemian life, I will tell you that.

Howard and I were selling donuts and Freezies on Saturday and in a rare lull, these two girls came up to me, two teenagers, and they said, "You are smiling so happily we thought you were smiling for a picture."

I said: "I am happy here in the donut booth."

We do not sell donuts every day so that leaves me time for my serious work. The folks at St. Anthony's where Leonard Pennario was baptized are pressuring me to get the book about him done and I have that on track for this year.

Email ThisBlogThis!Share to TwitterShare to FacebookShare to Pinterest
Labels: City of Buffalo Department of Coffee and Donuts, Donuts

You and Howard are bona fide Buffalo treasures. 💞