Another day, another drawing 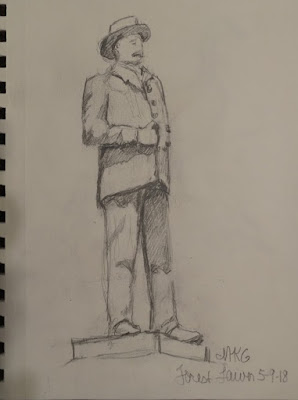 Yesterday I went back to the Lawn! That is how I think of Forest Lawn Cemetery because I am having such a great time drawing things here.

I have had a couple of days off from work so I am able to do this in addition to other work that needs to be done. Yesterday I drew an angel from a memorial near Mirror Lake. It would be hard to top that angel because that statue is just so graceful, so lovely.

However. Today there I am, driving very slowly down the path, Mozart on the car stereo, the sun shining, possibilities limitless, scanning the statues. And as if across a crowded room, I saw him.

I knew instinctively, he was The One.

Before I began to draw I ate some lunch I had brought and I studied the statue. Then I got up and addressed Mr. Bachert. I thanked him for his service and then said that I hoped he would not mind if I drew him.

Is that statue amazing or what?

When I went home I looked everything up. Wiedrich's Battery was a Civil War outfit run by Michael Wiedrich, who came from Alsace-Lorraine where my mother's family came from, or Elsass as I have seen it spelled in German Catholic cemeteries. The whole battery was made up of German immigrants from Buffalo.

My friend at work Scott Scanlon even did a story about Wiedrich's Battery and what monsters they were on the battlefield of Gettysburg and Bull Run.

When I was leaving, I happened to see another Civil War monument. This other soldier fought in Mozart's Regiment.

Who knew there was a Mozart's Regiment in the Civil War?

The bad news: You have to go fight in the Civil War.

The good news: You get to be in Mozart's Regiment!

I will have to find out what is with that.

That will have to be a story for another day!