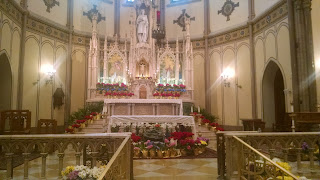 It is the middle of April but still snowing to beat the band. And raining. And flooding!

Yesterday for the first time I can remember, and we are talking years, the Latin Mass was called off at St. Anthony's. A monsignor was coming in from the country and he could not make it.

So my brother George and I and my niece and nephew Barbara and Georgie and I all piled into the Georgemobile and went to the 11 a.m. Mass at St. Louis. It is not Latin but they have a wonderful choir. And the church is so gorgeous. That is it up above. I took that picture after Mass.

Two of our friends from St. Anthony's joined us at St. Louis. It was funny in a way, our Mass getting canceled. Facebook was alive and jumping with everyone from the congregation trying to figure out what to do. And all the while it never stopped snowing or sleeting or whatever it was doing, this glop falling down from the sky.

When I opened the door at midnight last night it was still falling!

But anyway. The important thing is, when the going gets tough, the tough get baking. Back at my house after church, Barbara and I made cream puffs.

I have always wanted to try making these and since I had just made puff pastry for the first time, it seemed like a great idea. Barbara agreed although for a little while it was a kind of tough decision between cream puffs and the lemon meringue cupcakes in Martha Stewart's cupcake book.

We used the recipe out of my old Betty Crocker cookbook. When the puffs came out of the oven we both gasped with delight. 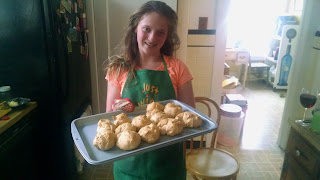 Then we did what Betty Crocker said and cut off the tops, put in this cream filling... 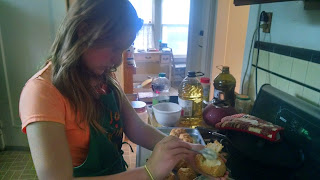 ... and closed them back up again. We made the cream filling too. It is kind of a Bavarian cream and it is a whole separate story.

The finished product. All we needed was a white bakery box! 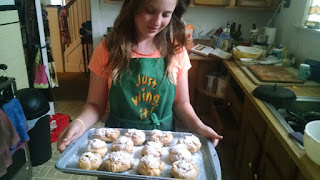 What an adventure. Is there anything more fun than baking?

They even looked good after we started to eat them. 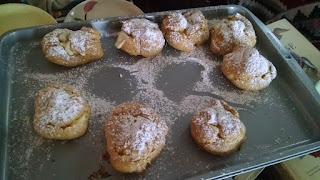