Bless me, Father, for I have cooked Today for church coffee hour I went back to a cookbook I've had for years and had completely forgotten about. It is this cookbook from Cape May's Mainstay Inn. It is called, "Breakfast At Nine, Tea At Four."

Why, you cute cookbook!

I made Banana Crunch Coffee Cake, p. 104. While it was baking I turned a few pages and found Orange Kuchen. I had an orange. I had everything I needed. So I made that too.

Here is a funny thing. Both the Banana Crunch cake took about three times as much sugar and butter as the Orange Kuchen. Both baked in the same pan, the 9 by 13, one of my favorite pans, I must point out.

Well, even though the banana cake took enough sugar and butter -- and coconut, too! -- to sink a ship, I made it as written. Give the people what they want! Several times I have skimped and tried to make things healthy and in that case nobody eats it.

Both cakes were a success. My friend Oscar complimented me on the orange cake. Oscar comes from some South American or Latin American country I can never remember, but he is an authority on baking and he loves the taste of orange peel. As do I! It is most zesty.

Another way in which I was a winner, I made a crock pot of white beans and greens, the greens being the collards from my Porter Farms CSA, which is another story for another day. One of the gentlemen complimented me on that! He and his wife were on some kind of plant-based diet and he could not believe his luck.

Long story short, here I am kicking back and listening to Harry Connick Jr. and basking in my greatness. Oh! There is one more thing.

Lizzie and I both managed to make it to Mass in a timely fashion! The Kyrie was just beginning which was not bad for us. Last week, even better, we made it in time for the Asperges. What are we doing right? We were trying to figure that out because it would be great if this trend continued.

I think with me, it was because I made two big coffee cakes instead of any number of smaller ones. That plus I made Amaretto Coffee Wreath ... 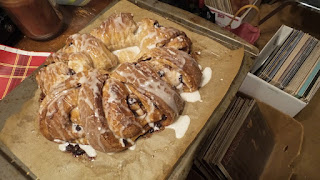 ... which was huge too. Howard took that picture of it on its parchment paper! I threw these treats together yesterday easily, among doing other things. Howard helped me carry them out to the car this morning so that was something else. He usually helps me but this morning he did the lion's share of it. Not as many pans, and a lot of help! That made a difference.

Now if I could only bring this kind of productivity to the rest of my life.

Onward and upward!
Posted by Mary Kunz Goldman on September 03, 2017