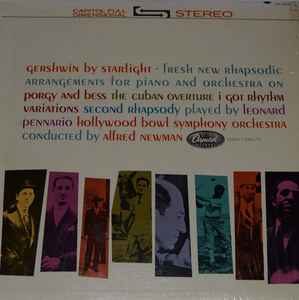 It is funny, the last time I wrote was about Amvets, and this weekend I was at Amvets again.

It was a lucky trip! The line was long and so I went to kill time looking through the records. And what jumped out at me but ...

That is this Leonard Pennario record I do not have. Pennario gave me these records and Gershwin By Starlight was supposedly among them, but inside was some loser's record, I can't remember who, but it was not Pennario. That was the one situation where the record inside did not match the jacket.

So I wanted this record, and I knew Pennario had liked it, but I had not gotten around to ordering one special as I have on many other occasions. Now, today, here it was!

It is extremely rare to find Pennario in a thrift shop so I was laughing later to myself about how casual I was.

"Oh, goodie, Gershwin By Starlight," I said to myself, and put it in my basket along with a Nancy Wilson album that was already there, and a Better Homes and Gardens Fix and Freeze Cookbook that I had selected because it had an AM&A's price tag..

Then I kind of did a double take.

What a lucky day!!