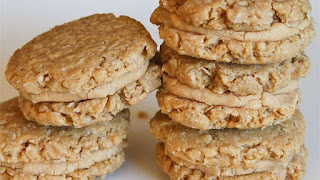 Today for our after-Mass church coffee hour I made Oatmeal Peanut Butter Sandwich Cookies. They are from Allrecipes.com and they were something of an adventure.

The recipes at AllRecipes.com are not always extremely professionally written. In this instance they listed a certain amount of peanut butter and brown sugar and forgot to say that you would not pour all of it into the batter, some of it would go into the filling. Usually you see the word "divided" in such a situation.

End result, as we say here in Buffalo, I had to double the recipe to cover for my mistakes.

End result, we had 50 cookies instead of 25. That was a good thing anyway. We had a big group and we needed them! We are trending up at church. Instead of our usual 100 or so people at mass we had 130.

All is well that ends well. However I must say, the recipe said, "Very easy!" and I rudely marked up the magazine and wrote: "No! Lots of work!" The dough has to be mixed and then chilled. The cookies must be dropped by rounded teaspoons and then flattened. They bake for 10 minutes and the trays are switched half way through. They cannot be over-baked! And when they are done you have to cool them on racks and then make them into sandwiches. It is a project that keeps you constantly in motion and occupied.

Very very good though. And they looked just like in the picture up above which came from Allrecipes.com.

What is it that makes baking so therapeutic? My sister Margie and I were discussing this on the 'phone just now. It has something to do with following a recipe and also I think with working with sugar and butter and cinnamon and chocolate and all that good stuff.

It makes me excited for all the baking I will be doing this season.

We are heading into a wonderful time of year.