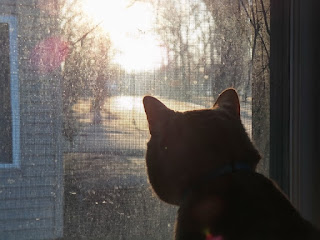 I know it is early but I cannot help thinking of this poem by e.e. cummings I loved when I was in grade school.

and eddieandbill come
running from marbles and
piracies and it's
spring

when the world is puddle-wonderful

from hop-scotch and jump-rope and


There is the poem. Now it is me again talking. It is sweet how e.e. cummings was so enthralled by the typewriter which I am guessing was kind of new at the time. The spaces, the punctuation, the capitalization or not. Even his name, it is so typewriter.

There is a font, American Typewriter. I think the poem should technically be read in that font.

I remember when I was a kid, and pretty little, I mean, about 9 or 10, I kind of "got" what he meant. That is how good he was. The world puddle-wonderful. And back then before iPhones we actually did come running from hop-scotch and jump-rope. How quaint I am.

Up above is a picture Howard took of Jeoffry looking out at the spring morning. I like to put pictures like this on the Web log because I do not want them to get lost in the shuffle of Facebook. We put it up on Facebook with the caption "Mine is the sunlight, mine is the morning." Because that was a song by Cat Stevens.

Spring! A little early but still.

There is nothing quite like a cat gazing out of a window on a spring morning! Great post.

On the typewriter speculation. This was probably written in the heyday of the typewriter, which was around early enough to be championed by that great early adopter, Mark Twain. Cummings was a visual artist as well as a writer.
Growing up, I was privileged to be acquainted with limited editions of many of Cummings' books that belonged to my father. They were very carefully and lavishly typeset and bound, and I expect that e.e. was there right at the typesetter's elbow. Looking back as an adult it's pretty clear to me that that early exposure had a lot to do with me developing a sensitivity to the book as object.

Generous Medium, what a generous comment! I will have to read up more on e.e. cummings. I am usually not much of a modernist but I have always loved the poems of his that I have read. I can quote a bunch of them off the top of my head -- though you have to see them as well as hear them, you know? That's wonderful that your father had those special e.e. cummings editions. Did he know the poet? I used to be a typesetter and I still identify various fonts as I go through my day. It's an art that I love.