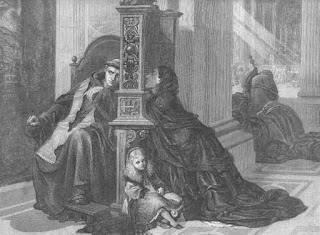 Today it was back into the St. Michael's confession booth with me. Yes, I drew aside the midnight blue curtains, and in I went with my sinful self. Two funny things happened:

For one thing, the priest gave me this creative penance the likes of which I have not heard.

I was supposed to go home and take a piece of paper and list five things that brought me joy in the last year, and five people who brought me joy.

Then for every thing and person on that list I am supposed to say an Our Father, a Hail Mary and a Glory Be in thankfulness. Hmm, the Glory Be looks funny in print, you know? But it is a prayer that I love. As it was in the beginning is now and ever shall be, world without end, amen! When you say that prayer you are saying a mouthful.

So that is one thing that was neat about going to confession today. Here is the other:

And Shrove Tuesday, I never thought about what it meant. It means confession! As in "shriven." Speaking of which, I am putting that in the headline because I read online there is some kind of slasher film stupidly called "The Shriven." I want people Googling that film to find me instead. Hahahahaa!

Ahem. Anyway, in days of old, people would flock to confession on Shrove Tuesday so you would be shriven in time for Lent.

I was shriven on Shrove Tuesday! And here I was just figuring I would beat the rush. I guess that was thinking back then, too. There were about a dozen people in line for confession at St. Michael's and for a while I had to stand and wait. A fellow penitent passed the time by painting my picture. 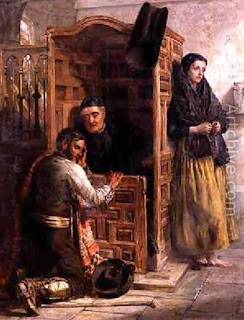 Then they opened a new confessional, the way at Aldi when there is a lot of people they have to open a new aisle. I have to say this, there were a lot of hipsters. A lot of guys. A few of them looked as if they must belong to a band.

All of us celebrating Shrove Tuesday.