Good will at Goodwill 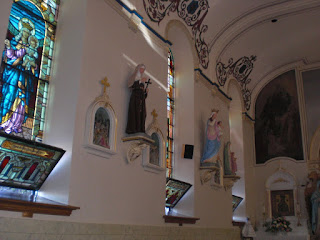 Today, long story but I wound up hearing Mass at Our Lady Help of Christians, on Union Road in Cheektowaga, pictured above in a view from the pew. I love that old expression, hear Mass, you know? It makes me think of the 18th century.

Although I have to say this, by the time we got to the Last Gospel, I was hearing not Mass as much as this screaming infant. There was one kid just screaming, that terrible scream that newborns have, as if they are being strangled. I wasn't annoyed or anything. You get babies at Mass, and that's fine. But .I had not gotten much sleep and I was kind of sitting there blinking.

After Mass I went across the street to Goodwill. It is a tradition that goes back to when my mom and I used to go to Our Lady Help of Christians together.

It is always funny to see if anyone else from the Mass shows up. I do not know many people at this particular Mass. But one woman I did recognize! There was no mistaking her because she was an African woman in traditional African dress. The dress was a deep green and she had a matching scarf tied around her head.

I had been predisposed to like this woman because she was one of the few people who got to mass a couple of minutes later than I did and I did not arrive until the Kyrie. That is a long  story involving my keys which I lost the other day on the Maid of the Mist. At least I think I lost them on the Maid of the Mist. But anyway, I noticed this woman and her elegant foreign dress. And as I held the door open for her at Goodwill, I had to say hi.

She smiled but it did not seem as if she spoke much English.

Then she got it and we were both laughing.

"Dominus vobiscum!" I said. That is actually plural, as in "The Lord be with all of you," but that is the phrase we use all the time at Mass, so why complicate things.

It was so cool because she could not carry on much of  a conversation with me at Goodwill, but she had been participating at Mass as much as anyone. We spoke the international language of Latin.

Followed by the international language of thrift shopping. Our paths diverged when I went off to look for Leonard Pennario records but crossed later in Dresses and in Domestics.

The world is getting smaller every day!
Posted by Mary Kunz Goldman on August 09, 2015