Disaster at the dance 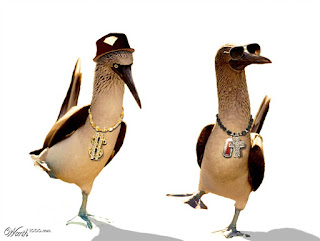 Remember the mourning doves yesterday? Last night they led to a drama.

It was so sweet because three doves -- I want to say three, though it might have been four -- were dancing on the top of the closed grill on the back porch. I mean they were actually dancing. They were changing partners and stepping this way and that and they would pause and kind of kiss each other. It was like watching a courtly dance like a minuet.

And I was enchanted, watching these birds. I was standing at the screen door gazing at them.

I was so enchanted that I totally forgot that at my feet, Jeoffry was watching too. But with antipathy. Like the Baroness when she walks out on the porch and sees the Captain and Maria dancing.

Suddenly there was this huge, jarring CRASH!

The cat had flung himself onto the screen and clung there with all four paws. Like a squirrel!

He had been watching and watching and his outrage was growing and all of a sudden he just could not stand it any more. He didn't get out, but the noise was this tremendous shock. The birds screeched and scattered. I have to say I have not seen them since.

I had to help Jeoffry down off the screen and then he went stalking away, his life's equilibrium restored, his dominion over the house assured.

I hope the doves come back!

But I will not be surprised if they don't.

If only you had been able to take a video of the scene - how sweet.