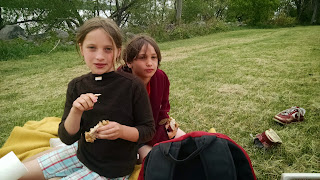 It is our first picnic of the summer. For this historic occasion we chose Squaw Island.

I do not think I have been to Squaw Island since I went there with Airborne Eddy and his Forgotten Buffalo tour! What a night that was, ah, what a night.

The picnic was thrown together in half an hour. I made, ahem, Roman Chicken. It is from an Italian cookbook I have. Roman Chicken is suggested for picnics. It is kind of strange because you do not grill it or roast it but you cook it in a pot, along with a sauce made of onions and bacon. I thought, trust the Romans. And I am glad I did because the little ones loved it.

Anyway, we reclined like Romans on the blanket and ate the Roman chicken, as well as the mac salad and cheese that my brother George had brought.

A surprise highlight was when a freight train went rumbling thrillingly over the 150-year-old railroad bridge. 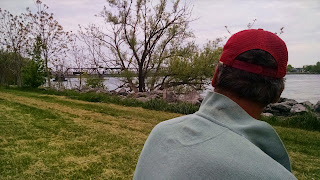 After that excitement the kids went and joined an impromptu ball game set up by a big Burmese family the next blanket down. These Burmese were a kick. They were also holding races. They would count down and then all the girls would jump on the backs of the boys and they would lumber forward like a herd of antelope. All of us, and all of them, were laughing and laughing over how silly it was. So much fun.

It was sweet to see people just lolling on blankets by the riverside. Surely an entertainment that has been going on since Biblical days. 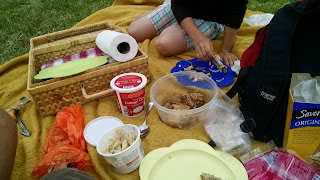 Anyway, a spontaneous picnic but a delicious one. It was like Pennario being able just to walk out on stage and play. I took this picture to show how unprepossessing it was, although, note the Saveritz crackers from Albrecht Discount.

As the summer unfolds our picnics will become more prepossessing!