Harping on 'The Flying Deuces' 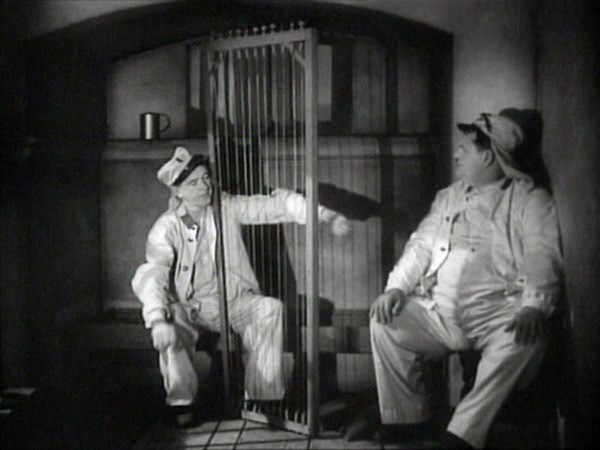 So we beat on, boats against the current. borne back ceaselessly to Laurel and Hardy in the French Foreign Legion.

A comment from a Facebook friend today made me look up the movie and read up a little more about it. Everyone should be as blessed as I am, to have friends who care about Laurel and Hardy! And I was reading about the scene in "The Flying Deuces" when Stan and Ollie are in jail, waiting to be shot by a firing squad at dawn. Stan dismantles the cot and plays the bed frame like a harp.

It was really virtuosic in the movie, which made it all the funnier when the jailer sticks his head in and puts a stop to it by barking, "Shut up!"

It ends up that you had really been listening to Harpo Marx.

Harpo Marx did the music in that scene! And not only that, but the song was, "The World Is Waiting For the Sunrise." Funny in view of what is about to occur. I have heard that song before but I do not have it in my head. In 1939, when this movie was made, everyone would probably have recognized it. Now we miss out on the joke.

How very cool all of this is, you know? Great personalities cooperating with each other, helping each other do the best work they can do. Stan Laurel collaborating with Harpo Marx.

That and, we love the airplane scene. When Laurel and Hardy don't know how to fly the plane and they are being chased by the Foreign Legion. The plane turns and chases the soldiers (at about 4:35) -- and then it turns the other way again, and you realize it is all by accident. Honest, I was laughing so hard last night I was crying.

I love the clever use in the orchestral score of the Laurel and Hardy theme.