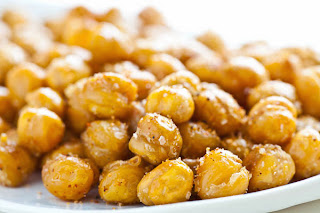 We had office cooking club and chickpeas came to my rescue.

It was a last-minute decision. Cooking club in general does not bring out the best in me. I can cook great dishes all week just for myself and/or Howard and our friends and whoever and then comes cooking club, where I am called on to show off my skills, and I tank. Well, it is not as if it is a disaster, not usually at least, but I often wind up thinking, I could do better.

This time around I did do better. I got off to a slow start the day before because although I knew I was making a soup or a stew, I could not make up my mind between chickpeas and black beans. And so, overnight, I cooked up a pound of both, in two crock pots.

I raise indecisiveness to a fine art!

The next day, Sunday we are talking, I was late in the game because I went to Mass and coffee hour and then there were the usual Leonard Pennario-related reasons. And then I went blithely to the Buffalo Philharmonic kids' concert, Jingle Bell Jam. That left me only an hour or so. Then I found this miracle recipe. It is Cinnamon Chicken Stew!

Perfect for the season, I thought. Cinnamon is such a wonderful flavor this time of year. The only thing I did was instead of the stick cinnamon I threw in a teaspoon or something or normal cinnamon. I had stick cinnamon, make no mistake. You can get it at Dollar Tree, a big jar, a great deal. But I did not think anyone wanted to bite into a big stick of cinnamon and the recipe said nothing about taking it out.

Anyway, end result as we say here in Buffalo, success!