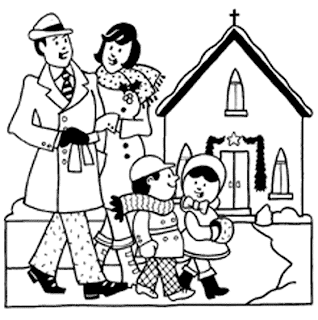 Yesterday there was a family at St. Anthony's nobody recognized and everyone noticed them because they were sitting right smack in the front pew. You could not miss them! Parents and several children. And you could tell they were new. They looked interested and engaged, just not completely acclimated to everything that was going on.

It turned out they were this Hispanic family and they thought the Mass was going to be in Spanish.

Latin Mass, get it?

It is amazing this does not happen more often!

So everyone was all over them at coffee hour. They were celebrities. Everyone was kidding with them and wanted to know them. One thing that was cool, this one teenage boy they had, he said to me he loved the Mass because it was more reverent.

He said that! It is amazing if a teenager just talks to you, let alone says something like that. Maybe we are dealing with a future priest here, you know? Anyway I was talking with him about the first Latin Mass I went to. I was all by myself and completely lost but I have always treasured the memory. There was something mysterious and glorious about it. And periodically something would come into focus. Like the Our Father, you get that chant melody you hear in modern masses. That somehow survived. Only at the Tridentine Mass the congregation does not sing it. There were other little things too, like the Sanctus, I recognized that.

So there this family was at coffee hour with all of us standing around them, fussing over them, trying to make sure they got the choice Tim Bits and that nobody bored them. It was an eventful coffee hour. Not only that but I got to talk about Leonard Pennario! My elegant British friend Alenka came up and asked how the book was going and I got to tell the newcomers about Leonard Pennario.

Haha, they will probably never be back. They are probably talking about us right now!

"All those people jumping all over us like a big St. Bernard!"

"And that one Senora who only talked about dead pianists."

At least they will remember us!

How do you like that? I thought only Protestant Churches had coffee hour after Services. Goes to show I only go to Catholic Churches when I get paid to play. :-(

Violinhunter, our coffee hour rocks! My big goal is to get my act together to make cookies for it. I am trying for next week.

Do I know you? Are you in Buffalo? I have trouble keeping tabs on pen names ...

Wait, is the coffee hour every Sunday? I've been going to St. Anthony's since 05 and have yet to go to a coffee hour.

You never know what seeds were planted with this family. Maybe some time in the future they will seek us out again or another location where it is offered.

I fondly remember when you were the new girl Mary... and wondering if we would ever see you again (you looked rather confused). Hahaha! :)

Bing, yes, the coffee hour is every Sunday! I am going to try to make cookies for it next Sunday. You should join us!

I had the same thought about the family. They were not at the most recent coffee hour this past Sunday. But you're right, you never know what seeds were sown.

And I do remember that day when I was new and confused! Hahahahaa! Now I can rattle off the Credo in my sleep..