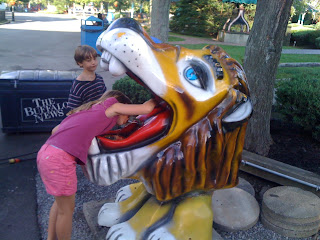 We had another trip to Fantasy Island yesterday! It is still open for a few more weekends before the end of summer.

It was a lot of fun. I was the last one to get to the park and the kids came running up. "We've lost our parents!" they reported delightedly.

So we all troop into the park. And it is funny, with kids, how crises hit really suddenly. It is like Liszt played by Leonard Pennario. There are surprises at every turn.

We have hardly taken a few steps when Barbara, who is 7, falls down and skins her shin somehow, gives herself this abrasion. That is Barbara up above, drinking out of one of Fantasy Island's classic water fountains as George Andrew looks on. Her injury was not much but it was one of those things that really hurts when it happens to you at first. So she is crying her head off and I am holding her and telling her yes, it hurts, you just have to wait it out, it'll stop, and --

Fantasy Island has this Wild West theme and if there is one thing kids cannot resist it is the stocks.

First George Andrew took his place in the stocks. Ha, ha! He still has his map of the park in his hand. That is our George Henry on the right looking on enviously. 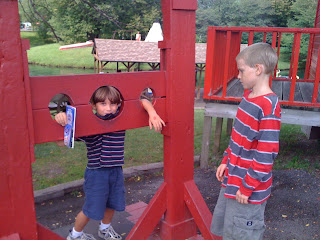 Then it was George Henry's turn. 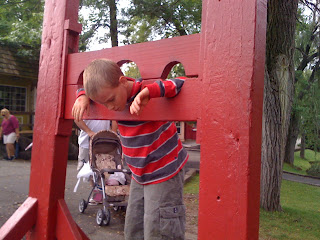 It is a miracle I could take this pictures because I still had my arms around this crying kid. But then Barbara snapped out of it, as I knew she would. The temptation of the stocks were just too much.

Barbara is a born actress. 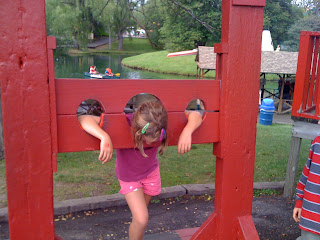 Notice the canoes behind her. Also note the Buffalo News box behind her in the picture at the top, with the water fountain.

We have had such fun this summer at Fantasy Island. My visits there were partly on account of, ahem, work, because I wrote this story on the Silver Comet, the roller coaster they have there. Anyway, I wish I could have gone there even more.

Summer is so short!