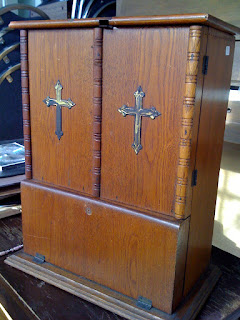 Yesterday I went with my mom to this estate sale in Amherst and there was a Last Rites box.

Note to non-Catholic Leonard Pennario fans, the Last Rites is the sacrament the Catholic Church gives you when you are dying. Now they call it the Anointing of the Sick. But once upon a time it was the Last Rites. Or, even better, Extreme Unction. That is a marvelous name! Unction refers to the oil you are anointed with.

But back to the estate sale Last Rites box. They said it was old. As you can see in the picture it is a box with doors that open. And inside ... 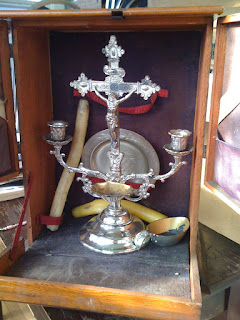 ... is a crucifix and two candles and two small silver platters. There is also a kind of silver ladle and a brush. That must be for the holy oil. In a pocket in the door you can see a holy water bottle. 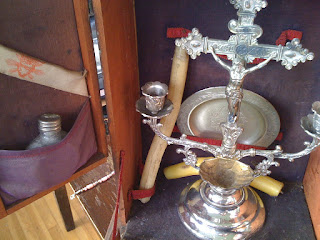 All I could picture was a priest taking it around to the homes of dying people. These people, this would have been one of the last things they saw. The crucifix and the candles. I mean, when this box shows up next to your bed, things are bad.

So I passed it up. But I hesitated enough so the purveyor, who was my friend Jim Lion, gave me his card. And at our next stop -- my mom and I were continuing to shop -- I began to have pangs of remorse and worry. What if this thing wound up in the wrong hands? What if some satanist got his hands on it? What if it turned up in a restaurant, holding silverware or something? It was like St. Joseph a few weeks ago.

Then I remembered the card. And I found a more-or-less quiet corner in the store and I called. What was $45, anyway? I spend that just walking into Tops and I do not think about it.

End result, as we say here in Buffalo, today I became the proud owner of this Last Rites kit. And now I know more about it. Because I went to that great religious authority, eBay.

It turns out that this would probably not have been the kind of kit a priest would have taken around with him. Back in the day, I learned, it was common for you to have a Last Rites kit in your home. You were supposed to be ready in case someone was dying and you had to call a priest. Also back then more people died at home, as opposed to in hospitals. My kit appears to date from the late 1800s.

That made it less forbidding. Judging from the beat-up candles and the splashes of candle wax on the top of the case, this kit seems to have seen some action. But still, it was not taken around to dying people on a constant basis.

While I was researching my kit I made another discovery. I saw a few pictures on eBay of more ornate Last Rites kits, shadow boxes designed to hang on your wall, like this one. This type dates from the 1930s.

And I remembered, back in my college Parkside apartment, we had one of those! It seemed to me it looked just like the one in the picture. I remembered the little cabinet it had, with a few mysterious bottles. It belonged to one of my roommates. But she did not know what it was and neither did I. I was this sporadic Mass-goer at that point and my roommate was some kind of Christian, but her background was Jewish and, well, my point is, although we were respectful of this thing and displayed it prominently in the apartment, I have these memories of us both drinking beers and looking at it and kind of scratching our heads.

Now I knew what it was!

After all these years!

It was amazing that I had not known any of this before now. I mean, here I am, I love my religion, I go to the Latin Tridentine Mass and still, dum de dum dum, I know next to nothing.

As I sat there, brooding, I wondered what had happened to that Last Rites kit. I wished I had it.

Then suddenly this thought struck me:

Maybe I do have it!

What do you want to bet? That roommate had wound up taking off on me. She had left in a hurry and probably would not have taken it with her. And I would never have thrown it out. I never throw anything out.

It had to be in my house somewhere!

There is this one room where there is all kinds of stuff piled, the room I do not go into. I went up into that room. "I'll bet it's in the closet," I thought. There is this closet I never open.

I opened the door. There it was! 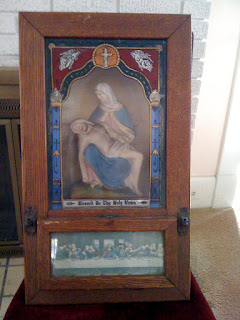 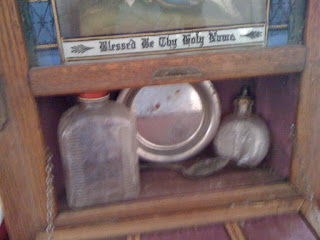 So now I have two!

That makes sense for me because if I am dying and need a Last Rites kit fast, having two doubles the odds that we will be able to find one of them in my chaotic house. With that in mind, I am going to clean them up and stock them with holy water.

When I die I want to be ready!

They also have crucifixes you can still buy that are last right kits. You'd take the cross off the wall and it slides open to reveal all the essentials inside: candles, holy water, oil and cotton (to wipe the oil off). Then the crucifix stands in the center of the case and candles on each side. -- Should a priest come to the house to bring the Blessed sacrament, a candle should be lit and meet him at the door -- out of respect for the Blessed sacrament (think Sanctuary Lamp). Sadly, I doubt this happens much.. if at all with.. say... Eucharistic ministers visiting the homes..

Though I hope you are not in need of it any time soon, display it with pride and remember all those who gazed upon those images for strength! :)

And that's *rites*, not rights. I'm a bad Catholic speller.

Bing, yes, I saw on eBay about the crucifixes. I learned more on eBay than I did in 12 years of Catholic schools! Do you have a Last Rites kit in your home?

I did have one some where that belonged to my great-grandmother. I'm not sure what happened to it though. I wonder though who would know enough to use it for me should it be needed -- Can they be used in hospitals (since the candles should be lit)?

I would imagine they could be used in hospitals, Bing .. I read somewhere in my Googling that priests have smaller kits they carry around, or they used to, anyway. That was when I realized that a priest would not have been schlepping around this big box. You should look for your great-grandmother's kit. Maybe it's like my situation, and you already have it!