Save me the waltz 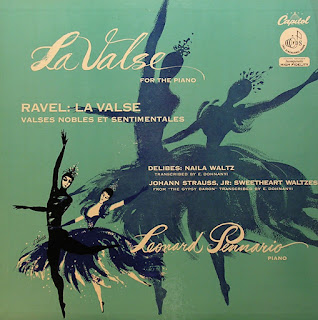 Today after Mass and after Zumba I had a lot of work to do but I did a tiny bit of thrift shopping. I mean I stopped into a Goodwill. I know, this is a shock. But I did.

This was the record that had the world premiere of Ravel's solo-piano "La Valse." Pennario was the first to play it by a very long time, I mean decades. Now nobody remembers that. Everybody wants to be a big shot and play that piece, but no one could tell you the first person to play it, who was Leonard. And Leonard played it better than anybody too. Listen for yourself.

Pennario records do not turn up as often as you would think at Goodwills. As Howard says, they are heirlooms. When they do turn up it is usually "Concertos Under the Stars" because that was such a massive best-seller, up there with Sinatra and Nat "King" Cole.

To find "La Valse" is extremely rare. It is more a piano-nerd album. Niche-market, you would call it. It is so beautiful, with its cool, cool artwork.

But here is what killed me.

I took the record out of the jacket and it was just as I expected.

It was all played and scratched up. The grooves were worn thin.

Honest, I get tears in my eyes when I see that. That is what I usually see when I take out one of these records. It just touches me so much how Pennario was loved. The people who bought his records did not stick them away in some cabinet somewhere. They played them. Even this egg-headed, piano nerd record! Someone had obviously loved the hell out of it.

A few weeks ago I was at a Salvation Army where the records are three for a buck, such a deal. Sometimes you see this situation, where somebody who obviously loves classical music and piano dropped off a collection. Or else his heirs did, who knows. Anyway there were all these beautiful piano LPs and I bought a few dozen of them. Horowitz, Al Brendel, Van Cliburn, Leon Fleisher, Byron Janis, etc. It was a treasure trove and I got all of it!

I figured there would be Pennario in there somewhere and sure enough, there was his album of the Tchaikovsky Piano Concerto No. 1.

I began taking the records out of the jackets, just glancing at them. They were all in pristine condition. Archive quality. I loved that! I was getting a deal here, these beautiful mint-condition records.

Then I looked at Pennario's Tchaikovsky concerto.

It was all beat up!

That was what was sitting on the turntable when all these other records were safe in their pristine little jackets.

What a wonderful legacy for an artist to claim, you know. That his records were played. That people loved them.

I have a newspaper clipping I love, that I found, from 1959. The writer referred to Pennario as "America's most beloved pianist."

Catching up with your blog after summer travels! I love your story of coming across those beautiful old records and your favorite, Pennario. Yes, the La Valse artwork is lovely.

When my grandfather (he was a pianist, too) died, there were all these old 78s of Caruso and I inquired about whether they were worth anything. Nope, I was told, they were turned out in the millions and the actual recordings have been digitized and aren't rare.

It killed me to throw them out, but they were heavy as lead and I wasn't about to drag them around. Sigh.

Solange, I wrestle with the idea of 78s. Sometimes I wrestle with the actual 78s! They are so cumbersome and heavy and difficult to play and they do not sound especially good. And you are right, I do not think records in general are worth much money. For one thing, I don't think people destroyed them. They gave them to Goodwill or something so they stayed in circulation. And they do not deteriorate, at least if cared for.

You will have to tell us about your grandfather the pianist!

Mary, I have just found your blog by way of youtube. I am a Pennario fan from back in the early 60's. Since then I have heard many performers but I must say none to the lyrical quality of Pennario. thank you for what you have done. I dabble in piano enough to understand the process and energy it takes to not just play but also develop a piece. This La Valse is unbelievable. I do have a number of Pennario recordings on LP. from the 60's. I have a collection of about 300 and I guess they will remain with me forever.

I wish there were some way to have an e-mail notification when you reply, Mary, as I get busy then remember days later to check your blog.

My granddad was named George Stevenson. He was always musical, but unfortunately never received a conservatory education.

He played professionally on the pipe organs in the big ornate silent movie theaters in Brooklyn. He also played in church.

Where did he play the piano besides at home and make a couple of recordings? I will have to ask my brother.

But in 1929, both the talkies and the Depression arrived and he was out of work for two years.

The family was supported then by my grandmother, a New York City schoolteacher.

By the time I came along, in the 1950s, Grandpa had stopped playing, having developed bursitis in his shoulders from over-practicing.

Music was always tinged with a little sadness in our house. My mother never played. I never thought to ask her why.