The wearin' o' the green 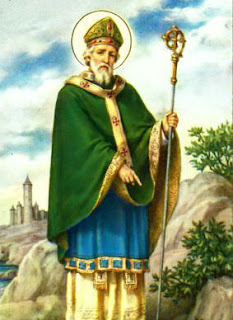 St. Patrick, pictured above, has me remembering the Irish branch of my family. My family is not Irish but there is a sort-of branch that is. That is the family that my father's family was close friends with in South Buffalo.

That family was the Nash family. They lived on McClellan Circle, on McKinley Parkway, right next door to the house where I lived until I was 4, which was at 193 Choate Avenue. The big cheese of the Nash family was Monsignor Nash who used to be the pastor of Holy Family Church. That was where my dad went to school and where I was baptized.

I am proud of having been baptized at Holy Family Church! I was a Holy Family baby and that means I am honorary Irish.

My Aunt Elizabeth Nash, though she was technically not my real aunt, lived in the great house on McClellan Circle when I was little. I think Monsignor Nash was her uncle, or something. After we moved to the suburbs our families kept in touch and sometimes we would go to Aunt Elizabeth's house for dinner.

Those evening I will never forget.

I was little but I always remember how we had to behave. We had to sit and shut up. The dinners, all I can remember is that they always included peas. Frozen peas, which still remain one of my favorite foods.

We had to sit and shut up and eat these peas and we were on our best behavior because we were around adults. There was no kids' table at the Nashes'. You sat with the grown-ups. You sat there and shut up and there were always priests and nuns at the table because the Nash family included a lot of priests and nuns. And it was only a matter of time until the dinner conversation turned to the Church, and stayed there.

The adults all talked about the Catholic Church and we kids all sat there and ate our peas in silence.

I did not mind. I thought it was cool to be among the adults. It was funny, I had no idea back then that anybody was ever anything but Catholic.

But here is what was really magical.

After dinner everyone would go into the living room where there was a piano. It was not a grand piano. The grand piano was upstairs. This was just a spinet, or an upright, something like that. Someone would sit down at the piano and the Nash family elders would sing.

I remember my Aunt Elizabeth singing: "Oh Paddy dear, and did you hear the news that's going round..."

"They're hanging men and women there for wearin' of the green."

Those words! They frightened me and thrilled me.

My Aunt Elizabeth would sing that song and she was always so matronly in my memory, but I always thought she was so graceful and beautiful and glamorous, in a way. They would sing that song and other Irish songs. "Danny Boy," or whatever the lyrics were then. My Uncle Simon Nash was a judge and a wonderful singer who sang at the Latin Mass at St. Vincent de Paul. Leonard Pennario ...

... used to go to that Mass when he was in town. And you wonder how Pennario would work his way into this post. This is how!

Looking back I know I was seeing something that is in the past. These were people born in, if not the 1800s, awfully damn close to then. These Irish people, they would eat dinner and then go and sing. All those beautiful old songs. That is something you will never see now. It belongs to a time that is gone. I am so lucky that I got to hear it, to see it, way back when.

I toast the Irish on St. Patrick's Day.

I toast those memories.