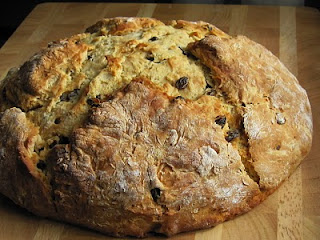 For St. Patrick's Day I decided to make Irish soda bread. It is the easiest thing in the world to make. I made Irish soda bread when I was a little kid. I am sure my 6-year-old niece, Barbara, could make it.

My kitchen is where the luck o' the Irish runs out.

I was all excited about this recipe by Deborah Madison -- I will name names -- that had oats and whole wheat flour. And it looked so easy. I take two big bowls including the one I scored at Vinnie D's a few weeks ago, and I set to work making two loaves of this stuff so we could eat it while we watched the parade.

"Gather the dough up into a ball," read one line of the recipe. You could not gather anything up into a ball, that was for sure. It was like a bowl of batter. So I am adding flour, and more flour. Meanwhile the kitchen gets coated in dough because it is all stuck to my fingers and everything I touch gets flour-y and buttery.

Finally I glopped the stuff into the flat discs you are supposed to shape it into. One goes on a cookie sheet, the other on a baking stone. That was one positive aspect to this situation, I got to use my baking stone.

"Cut a cross in the loaf." Yeah right, as Leonard Pennario used to say.

Into the oven they went and I anxiously watched them. I kept turning on the oven light to peek and see if they were rising at all. They were not.

What is Gaelic for zut alors?

Only I could goof Irish soda bread!

As I was watching and waiting the phone rang. It was my friend Lynn who was going to watch the parade with me. She was making Bailey's chocolate cupcakes.

She said that when she baked the first half dozen, she noticed they were kind of blond for chocolate cupcakes.

That was when she noticed the cocoa still sitting in the measuring cup.

As Lynn said, "This is what happens when an Italian and a German try to celebrate St. Patrick's Day."

However. It did all come out OK and Lynn's cupcakes, heaped with green frosting, looked most professional and we enjoyed them while watching the parade on this glorious warm day from the steps of Big Blue. And the soda bread came out well too no thanks to that deeply flawed recipe. Normally I trust Deborah Madison but I do not know what happened here.

Perhaps she was into the Bailey's!
Posted by Mary Kunz Goldman on March 19, 2012