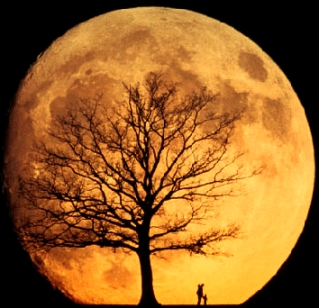 Last night we were driving home from Denton, Cottier and Daniels -- the august piano store that sponsored Leonard Pennario's first piano recital -- and Howard called my attention to the moon.

A funny way of saying that the moon was way down near the horizon half obscured by trees and brush and such. It was big and red and a kind of crescent. Sort of a half moon. And it was arresting. It was weird. Tom Bauerle even talked about it on the radio today, how strange the moon was.

We went home and went to bed and I could not sleep because I had a lot on my mind, work stuff mostly. So I got up. I was not upset or anything because this happens rarely these days. Normally I am a good sleeper. I made myself some chamomile tea and I sat down on the couch to enjoy it. I love the taste of chamomile tea.

And sometimes what I do when I am up in the night is, I read my missal. It is fun to read Latin and I kind of try to translate it, only I am lazy and do not work too hard. I just kind of take a stab at it. It is sort of like doing a puzzle, and you feel you are learning something, so it helps me get sleepy again.

So. I am re-reading the prayers and the readings from Sunday which was the first Sunday in Advent. I love Advent, Christmas, all of it. It is a magical time for me and not just because you can go to the Place and drink Tom and Jerrys, yum. I just love this time of year. And I am reading how Jesus said to his disciples...

There shall be signs in the sun, and in the moon, and in the stars; and upon the earth distress of nations, by reason of the confusion of the roaring of the sea and of the waves ... For the power of heaven shall be moved. And then they shall see the Son of Man coming in a cloud with great power and majesty. But when these things come to pass, look up and lift up your heads, because your redemption is at hand.

I read this and remembered the moon.

Jesus said the moon. The sun, the moon and the stars.

Everything has been looking weird lately come to think of it!

This is silly but I got up off the couch and went out to the sun room and looked up at the sky. I felt like an idiot but I had to check, you know? Everything was pretty much sitting there as it was supposed to. The stars. The moon, I guess that was there somewhere although I do not think I saw it.

I sort of hoped a star would fall or something but none did.

For a minute or so I stood there. The streetlight changed on the corner. It is funny, when it gets quiet enough in the middle of the night you can hear the mechanism that changes the streetlight.

You just get to wondering sometimes. The world sure does look strange these days. All the unrest, all the chaos. The trouble is, we do not have a good grasp of time given our short lifetimes. Now it is 2,000 years since Christ was born but we do not know if it will be now when He comes back or 20,000 years from now. There is just no way of knowing. I am not one of those people into Nostradamus or anything like that.

It is just that I can imagine Christ coming back. And I can imagine it being now. It has to happen in somebody's lifetime, doesn't it? It could be ours.

It is strange to think of what we are told will happen. The graves will open up, the dead will return.

I was remembering a conversation I had with a friend of mine who is a fundamentalist Christian. He is not a Catholic but we have certain things in common which, one of them is that he wonders about this stuff too.

He said, "You know, the thought of Christ coming back in our lifetime, it's scary. But it's kind of exciting, too!"

Sure, we were into the beer, but we both sat there with our eyes wide and thought about it.

If you see anything weird, let me know!
Posted by Mary Kunz Goldman on December 01, 2011