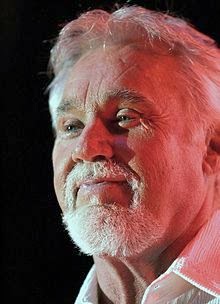 Seeing Kenny Rogers at Kleinhans last night at Kleinhans, I have respect or this show business veteran.

He was kind of startlingly frail considering the big, husky guy we remember from the '80s. But his heart was in this show. Here is a guy born to perform. There is a beauty to seeing someone like that out there on stage. It is as close as we come to old-style vaudeville. Plus, his voice is still beautiful.
The bad news was, Kenny did not change his speech about "O Holy Night" as I had asked him to. You cannot teach an old dog new tricks! He did the whole thing, starting with that hilariously wrong-headed statement that the song "was written as a Catholic Mass."
Hahahaaa! Next he said "Silent Night" was written "as a Catholic Mass."
It is rare to find someone so at sea as to the Catholic Church, you know?
The good news was that in the Meet and Greet -- a story in itself -- Kenny was nice to me and wanted to talk to me. Which was fun! Except I did not notice. My brother George was kind of disappointed in me because I did not pick up on that. George said, "Kenny wanted to talk to you and was trying to get your attention and you were just busy finding your coat."
Hey, you know what? That is just too darn bad.
Leave 'em wanting more, is my philosophy.
Plus you have to watch it with these guys. Leonard Pennario came to town and he asked me to sit down next to him and I said yes and look what happened, suddenly boom, I am in California.
I would get talking with Kenny Rogers and suddenly there I would be on his tour bus with his band, helping him with his memoirs. Instead of Lenny it would be Kenny. No thank you, I have to wrap this project up first.
You gotta know when to hold 'em, know when to fold 'em.
Posted by Mary Kunz Goldman on December 22, 2011

Jennifer, I just saw your comment. Too funny!! And oddly enough today I was just writing about your Web log! We are two trains, running on the same track...