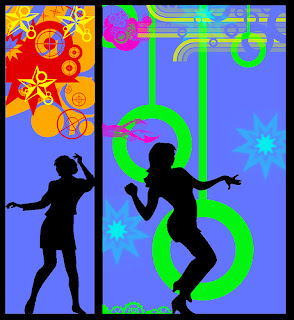 Today I am back in the land of the living. I finally think I kicked this cold. Looking back I thought I had kicked it on Sunday. Ha, ha! Good one, Mary!

Yesterday the cold and I celebrated our one-week anniversary!

But today I finally felt better and went back to Zumba class.

I got the idea to go to Zumba only in the late afternoon. I did not think I would be up to it because I was still sleeping with Nyquil. But, all of a sudden, I was! It was a magic moment. I realized I was feeling better!

Going to Zumba was a surprise thought, a secret thought, like all of a sudden in the middle of a work day in the summer you might think: when I get off work, I am going to go to the beach. I got all excited. And after work, sure enough, there I am, parking in the parking garage, walking to the gym. I love going to the gym. It makes me feel alive.

All week I had been out of it and going nowhere so I felt like a tourist in my own hometown. I wondered about Occupy Buffalo. That is this protest going on supposedly in Niagara Square. Will I hear the drums? I wondered. I had heard they were beating drums.

But walking to the gym which is right next to Niagara Square, I heard no drums. I saw no evidence of anyone.

The only thing I saw was, this one lost-looking hairy hippie showed up with this camera. He was looking around and seemed to be heading over to Niagara Square. I assumed he was looking for Occupy Buffalo. I kind of nodded to him and continued on with my gym bag to the gym.

I walked up the marble steps of the gym -- this is the, ahem, Buffalo Athletic Club, where Leonard Pennario used to go, may I add -- and for some reason as I opened the door, I turned around.

And the hairy hippie was taking a picture of me walking into the gym!

Hahahahhaaa! I am afraid I kind of turned away instinctively, but that was just out of astonishment. I did not exactly mind having my picture taken. Heck, snap away. I always the advice Howard Stern gave to Princess Diana, based on his own experience, on how to deal with the paparazzi: "Stand there until they get sick of taking your picture."

But I had to wonder why this guy was taking my picture.

All I can think is, well, the Buffalo Athletic Club has a very stentorian entrance. It is in a beautiful dignified old brick building downtown ... 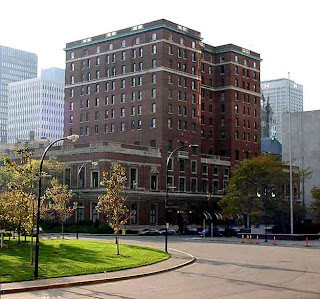 ... that also houses other offices. You walk up the marble steps and there are beautiful old lanterns on either side of the door.

And there I was, standing on these marble steps between these lanterns, and I had on this beautiful herringbone skirt from West Germany that, I got it at a garage sale, but this hippie would never guess. I love how the label specifies that, West Germany. I was carrying a green jet bag with my Zumba clothes and I had on my nice black heels.

Hahahahaa! That Occupy Buffalo person probably looked at me and saw the enemy!

He was probably from out of town and saw me going into this dignified building and thought: Look, there is a bourgeois banker woman walking into this bank building carrying a green bag full of money. I am going to take her picture before I go on to Occupy Buffalo. And we can put the picture up and use it as target practice.

Either that or, he recognized me as the authorized biographer of Leonard Pennario. Which, then I could understand him taking my picture.

Well, whatever. Either way, I am glad to be back in the land of the living.

It feels great to be feeling better!
Posted by Mary Kunz Goldman on October 20, 2011