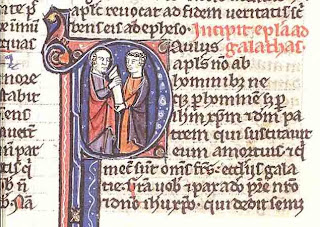 News, there is news about the mystery missal!

My friend Jerry left a comment. "I know the owner," he wrote.

Privately he wrote to me a note saying that I had bought the missal most likely from his garage sale a couple of months ago. Ha, ha! I remember that garage sale. Jerry is great. As my mom and I were approaching his driveway he came running out yelling, "No more Leonard Pennario stuff! We sold it all!"

Jerry also has this unusual talent. He can do the best imitations of the guys who used to be in the underwear ads for Kleinhans, the old Buffalo men's clothes store. His wife made him do his imitation for me. It is classic! Jerry points out that the models were always pointing at something. He was there in his garage striking these poses and we were all cracking up. Hahahaa!

But back to this missal.

Jerry wrote to me that it had belonged to his uncle and he had not looked at it closely enough when he sold it to me. He said it would be useful for family genealogy. It sounded as if he regretted having sold it.

I started feeling all guilty for having snapped this thing up. Maybe I should give it back to him, I said to Howard. At least maybe I could give him some of the holy cards.

Howard said I should tell Jerry, "I want to see you at Latin Mass, at St. Anthony's, every week, for two years!" Actually he said four years. I am giving Jerry a break here.

I wish I could remember the rest of Howard's speech. It went on and on. I was laughing too hard to retain it. But the reasoning is, only after attending Mass in the Extraordinary Form, to use its proper title, and by protracted exploration of this intricate and confounding and true and beautiful faith would Jerry begin to realize the worth of this missal which, as we have discovered, goes far beyond family history. As the poet Goethe wrote:

That which thy fathers have bequeathed to thee
Earn it anew, if thou wouldst possess it.

I got that quote from "The Joy of Cooking." It is the opening quote!

Anyway as Howard said, and he is right, that would be the way for Jerry to honor his uncle. My guess is that the uncle wants him to do this. Jerry says his uncle was always praying for everyone in the family.

So anyway, Jerry, out there in Blog-O-Land, I am at St. Anthony's every Sunday at 9 a.m., usually on the right near the front.

Mary - Howard is right. You need to keep the missal. It is much better in your hands than in the box it had been sitting in since 2002. Regarding my need to go St. Anthony's (where that missal spent many hours, BTW), I do love incense, so maybe I will see you there! Also, some clarification about my "underwear modeling" - I was NOT in my underwear at the garage sale while recreating the Kleinhans ad.... Hey, maybe if I was, that may have had an impact on people stopping by (fewer???).

Coercing someone to participate in religious rituals is very old school. What's next, hot coals?

Bill, relax! No one is coercing anyone to do anything. Look, that is Jerry commenting up above. He sure does not sound to me as if he is being coerced.