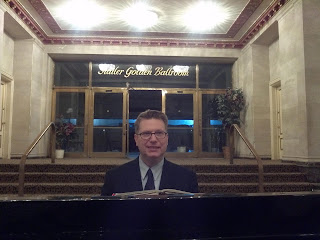 Yesterday Howard played a gig at the Statler. It was the first payoff he got from his successful efforts to find the old hotel a buyer. He got to play a cocktail party for Business First.

That was Howard's hope when he saved the Statler, that he would be able to play there!

Business First is a business newspaper and they were giving out the Brick By Brick Awards. People were walking out carrying bricks.

That is Howard up above playing his gig. He is the Leonard Pennario of the Statler! What I like about the picture is how it makes him look like a cardboard cutout. As if he is just faking playing the Statler. But he was not. He was there! But I was not. I was at Parings Wine Bar with my mom. The picture was taken by his friend Zbigniew Bielinski.

The good side of that is, I get to mention someone named Zbigniew on my Web log. That makes me feel cool.

Awright, Howard - you played it for her; you can play it for the rest of us... post it!