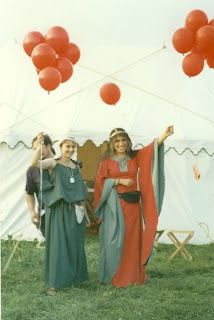 My friend Missy is Tweeting from the Pennsic War. That is the war down in Pennsylvania that I used to go to when I was a kid. I think the last one I went to, I was 22. No, 23. I don't know.

Every once in a while I think about going again but there is Leonard Pennario and I cannot leave him, alas. I mean I cannot leave this project until it is done, I am sorry.

I admit there are things about the war that I miss. This is the Society for Creative Anachronism, which more or less recreates the Middle Ages. I miss waking up in the tent and hearing the sound of people in armor tramping past. Well, sometimes I had to go out and put on armor and be among them. I did not like that!

I miss people bowing and scraping to me which happened when I was the Queen of the East and led troops into battle.

It was fun to sit around campfires at night. Missy tweeted something about listening to recorder music and drinking 18-year-old Scotch that made me wish I were there by her side as in the old days.

Most of all, the long days of doing nothing.

You would sit and watch the medieval world go by.

It was fun, the commitment everyone had to it. Once at a campfire I ended up drinking beer with this girl who had hitchhiked to the War all the way from Israel. Imagine hitchhiking from Israel! I could not imagine that then and I can not imagine it now.

Not only that, but she had lost all her bags somewhere. They had been stolen or something. But this Israeli girl did not care!

She said: "The important thing is, I'm here."

What a great attitude toward life! We should all have it.

That is me up above playing with medieval, ahem, balloons. I am on the right and that is my friend Jacquetta with me. She is probably Tweeting from the War too! I will have to go check. Jacquetta still looks exactly the same.

Here I am with my friend and now Facebook friend Severin. 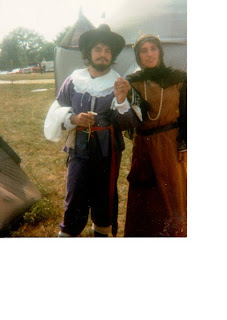 I was kind of a goof-off in the SCA but still when you were in it, the Middle Ages had a way of working its way under your skin. You learned, whether you wanted to or not. For instance I joined the SCA on St. David's Day which was in the spring. People would ask me when I joined and I could not remember the date but I did know it was St. David's Day. And that was before I knew saints' feast days.
And that St. David was the patron saint of Wales. I learned that in the SCA. Also I seem to remember it was March 1. That just came back to me.

It is not as if the SCA was religious. Far from it, trust me. And it actually should have been more religious, because what was the medieval era without religions?

But whatever, you cannot do the Middle Ages without some things sneaking in. Also I learned to embroider, more or less, and to do three styles of calligraphy. I could do Roman Uncial, Celtic Roundhand and Gothic. These are skills I still have.

I learned how to illuminate manuscripts by drawing strings of twisting vines and leaves and flowers. When I am on the phone this is still my go-to doodle. I will start with a twisting S shape and then add the leaves and the flowers. I learned how to draw curvy leaves so you see the up side and the down side.

What else did I learn? Once at the War, there were a few Catholic priests who were in the SCA and they were all saying Masses on Sunday. The priests got into the spirit of things and this one year, you could choose among an ordinary vanilla modern Mass, or a Latin Mass -- so I guess there was my Gregorian Chant -- or a Mass in the Byzantine Catholic rite.

I went for the Byzantine Mass! It was the Liturgy of St. John Chrysostom. Mozart was born on Jan. 27, the feast of St. John Chrysostom, and that is why he was named Johannes Chrysostomus. We should all go back to naming our kids after the feast days they are born on, you know? You do not even have to use those names. Just tack them on the way they used to do.

The priest at the Byzantine Mass had the most beautiful sky blue vestments, as I remember, trimmed in gold. Actual gold, I seem to think, although maybe I am embroidering it, so to speak, in my memory. Before Mass he explained the vestments to us as we all gathered around.  They were very valuable, heirloom vestments. This priest, he was so nice. We were used to him drinking beer with us and stuff but all of a sudden he was very reverent and so we just sat and listened. It was like seeing him in a new light.

He had really done his homework for us, now that I look back. He had copies of the liturgy all ready to hand around and we got to keep them. I took mine home. I think I still have it somewhere. I always remember one line: "Oh, God, forgive me, for I have sinned without number."

That has such a "Dr. Zhivago" ring to it!

Mass went for about two hours, with me sitting there with my friends, in my gown and veil. It is funny, I am wearing a veil again at Mass now. I do think about the SCA sometimes at the Latin Mass because with all the Gregorian Chant, it is like going back to the Middle Ages. In  some ways it is more vivid.

I could walk into a cathedral in 1100 A.D. and participate in the Mass! I could pray and competently sing along. Imagine that.

It is a funny thing about the medieval era.

It never quite leaves me alone!

Email ThisBlogThis!Share to TwitterShare to FacebookShare to Pinterest
Labels: Society