Phantom peppers. and other mysteries 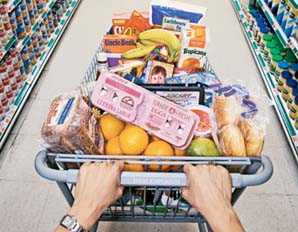 Today after work I was at Tops, picking up stuff for my mom, and you know how you get those clueless cashiers sometimes? They are not all clueless but some of them are.

I am looking at the screen where they ring up your purchases and he has: "Hungarian Hot Peppers, $6.99."

And I have bought no Hungarian hot peppers!

What, am I radiating the presence of peppers because of my experiences over the last few days? Perhaps.

But anyway, I am standing there politely, afraid to speak up, afraid to sound like a fussy customer. Finally though I could not help it. Sometimes ringing something up they call something a different food, the idea being that the price is the same. Maybe that was what happened.

In any event I spoke up lightly. "What's with the Hungarian hot peppers?" I asked.

"Hungarian hot peppers," I said, pointing to the screen.

This seems to be happening to me everywhere and it makes shopping stressful.

I was in Walgreen's the other day with my mom. Normally I do not shop Walgreen's. And I bought a couple of things on sale, things you got most of your money back for in their "register receipts," which is like the CVS Extra Bucks.

One of them was this nail polish. Walgreen's has this arcane coupon system and I was not sure if I needed a store coupon. The cashier said I did not but then she asked to see where it was in the sale flier. I'm thinking, why do they have to see it in the flier? Shouldn't the cash register just ring it up automatically? But no, apparently they do not. I had to hang over her shoulder to make sure I got the $3 register receipt. "Oh, there it is," she said when the receipt printed.

The bottle of shampoo I bought, because I was not hanging over her shoulder on that one, that did not print. So I was ripped off $3. It made me mad because I would never have bought this stupid shampoo ordinarily. And I was too stressed out to go back in and argue. I should have. At the moment, though, I had just had it. I had my hands full. They had caught me at a moment of weakness.

Hereafter when I go shopping I will have to wake up.

It is dangerous if you do not!

You need to contact Michele, the Queen of Garage Sales, to school you in the fine art of the Super Refund. When a store erroneously charges you for an item in their computer database, you are eligible for a Super Refund, which is 10x the difference between the actual price and the incorrectly scanned price. This is a NYS law that has been on the books for a number of years to protect consumers. The stores hate it...

Michele reminded me that the maximum Super refund is $10.