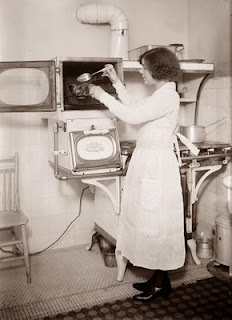 Anyone else ever cook in the morning, I mean anything other than oatmeal and eggs?

I am stuck doing that this morning because yesterday I had one of those days when your feet never touch the ground. I mean, I was never home! I went to work and I was full of all this energy, accomplished a lot of things I had been putting off. And right before I left, I had 10 minutes and I thought, I bet I have time to write a Web log post. So I pontificated on the Gusto Blog about the BPO App.

After that I went to Zumba, which was a ton of fun, all these tremendous hip-hop dances I just am not designed to do. Then I went around the block -- I was at the downtown Buffalo Athletic Club -- to St. Anthony's. Because it was the anniversary of the consecration of St. Anthony's, founded in 1891. So they had a special Latin Mass and you know me, I had to be there.

The padre was talking about all the generations of people associated with St. Anthony's and you know me, all I could think of was Leonard Pennario. That reminds me, there has been tremendous drama on the Leonard Pennario front. But I cannot go into that now.

After Mass I hooked up with Howard and we went to a jam session at our friend Gary's. I love going to Gary's and, long story short, did not get home until around 1 a.m.

So, today I have nothing for lunch and that is why I am cooking this morning.

Weird to be chopping up eggplants and squash. Then to open a bottle of wine at 8 a.m. It is not what you think! I wish it were. The truth is, I was just pouring a half cup into this stew.

Then, the tying on of an apron. That is something I always do at night.

I wish it were night!

Because then I could have some of the wine. Also it would go better with the smell of garlic. There is that too.

It is strange to turn the day upside down.

I am paying for yesterday.
Posted by Mary Kunz Goldman on August 03, 2011