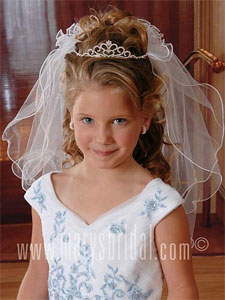 Today was First Communion day at my church and I could not believe the little girls in their white dresses and veils.

They were better put together than I was for my wedding!

The picture above is from the Internet but I mean look, she has an actual hairdo. I did not have a hairdo like that when I got married! The girls at St. Anthony's did not look quite so worldly as in that picture but still, amazing. So beautiful and so elaborately clad!

In his sermon the padre made note of it. He said, "It is so nice to see the girls dressed like little princesses, with tiaras in their hair. And the young men dressed like young men."

Ha, ha! I liked that. It is rare to see young men dressed like young men.

Then the padre reminisced about his childhood in Northern Italy.

It was funny but here is something I noticed. Other than the children being dressed up and making their First Communions and some remarks in the sermon, the Mass was exactly as it was every other Sunday. There was no more reference to the First Communions after the sermon. The children received Communion with no fanfare and the hymn -- the only hymn, because this is, ahem, the Traditional Latin Mass, and we have only one hymn, at the end -- was "On This Day, O Beautiful Mother" because it was May.

Get used to it, kids.

It is not about you!

Still I have to say, a fine group of First Communicants. Very well turned out.

And so into another week.

I love the "get used to it kids, it's not about you" line! Catholics have been taught that we are the focus of the Liturgy.. and kids in general are taught the world revolves around them.

You have mentioned before we only get one hymn.. the recessional. What do you mean by that? haha (I get confused easily) - We have a processional hymn (usually one verse), an offertory hymn, communion hymn (which today was Regina Coeli) and a recessional hymn. And any of these can be done in English - but we prefer the Latin :) If you mean we only get one hymn in English.. then yes.. it's usually saved for the recessional. We "traddies" are hardcore when it comes to our Latin.