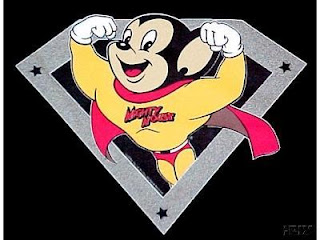 For a few weeks now I have been finding, ahem, evidence of mice in this one lazy Susan in the kitchen. It is this big lazy Susan cabinet down below, where mice must get in through the wall or something.

Larry was here the other day to clean and I told him of this, ahem, evidence. And I asked him to clean it out for me please. And he did!

A few days later there it was again!

I was taking a break from Leonard Pennario because I had to eat and I was going into the cabinet looking for barley for this stew I was making. There is this big carefully sealed plastic jar where I keep bags of beans and barley and things like that. Only things that begin with a "B" go in that jar! But that is a story for another day.

For now my story is about I pulled out this one bag and it began spilling all over.

And I realized that the bag had been chewed!

Mice had gotten into this jar somehow!

The mice had gnawed through it!

How long would that have taken? It was like "Escape From Alcatraz." These mice came in night after night in the dead of night, chewing away, tunneling into this jar. How did they even know food was in there?

Mice sure are mysterious!

And my house is sure mysterious too. Allow me to cry the blues for a moment: Everyone else can put bags of stuff everywhere and, no problem, no mice. Me, I have things all sealed up nicely, or as my mom said, "micely" -- and still they get in. It does not matter what I do. Mice just love our house. Remember the mouse at Howard's desk? And the mouse in Howard's nightstand?

The good news is there was no mouse actually in the jar when I was poking around inside it. Imagine if there had been.

St. Patrick is said to have driven the snakes out of Ireland.. maybe he can get rid of the mice in your house.

If that doesn't work.. call an exterminator! :)

Mary, I have a mouse (or mice) in my lazy susan, too. They chewed right through the plastic of the roasted almonds. I have sealed everything in that lazy susan, yet somehow they figure out a way to get to the goods. It's a war between mice and men! I wouldn't mind feeding them if he left their poop elsewhere. That is the part that disgusts me.

Yeah, the poop is the worst. But on the bright side, misery loves company! Thanks for sharing your story, Liz!

Bing,if anyone succeeds in driving the mice out of our houses, we must canonize that person immediately.