A lot on my plate 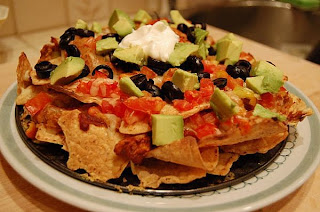 Last night Howard and I and our friends Mike and Melinda went to the wild Mexican restaurant Cozumel for Restaurant Week. Cozumel is on the outskirts of downtown Buffalo. Normally we might have gone to Wasabi on Delaware Avenue in Kenmore. But no more!

We no longer feel safe in Kenmore!

What if we were heading home from eating sushi and a municipal vehicle plowed into our car?

The plow incident was one of the issues of great import discussed over dinner, others being work gossip, Mike's mother's funeral and, of course, Leonard Pennario.

I had a glass of wine -- well, two glasses -- which tasted yummy after three days without wine. I am always flirting with the South Beach Diet so once in a while I end up skipping wine for a while. Plus it is fun sometimes to go without wine for a few days so when you do drink it, it tastes extra good.

We ate mountains of nachos. As Howard said later, this restaurant really feeds you!

As far as conversational topics went, Mike's mother's funeral is not the downer you would think it would be at the table. It is an involved soap opera involving Melinda, a Presbyterian with no great love for the Catholic faith, conferring with a Catholic priest out in Tonawanda who, I pity the fool, is all I can say, I pity him.

I got to pontificate to Melinda on Catholic funeral tradition which in its pure traditional form means no eulogies, no cute anecdotes, nothing except serious-as-a-heart-attack Latin prayers for the soul of the deceased. At a traditional Catholic funeral, and this is the type I want, you dot the i's and cross the t's and then you send the departed into the next world and pray and hope for the best.

If you want a look at the old-style Catholic funeral check out this. There was no room for joking! There was also none of this talk you get now about the deceased being in heaven already, instantly. Everyone now assumes you go directly to heaven. Sorry Charlie! Not so.

How did I get from nachos to this?
Posted by Mary Kunz Goldman on March 31, 2011

My father always said when he died, he'd go to Creep. When we asked "Where's Creep?" he'd reply "Five miles below Hell." I think I will outdo him.